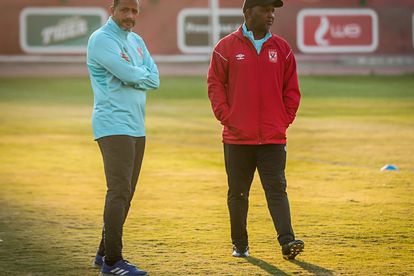 Pitso Mosimane may have gotten Al Ahly’s CAF Champions League campaign back on track, but their Egyptian Premier League performances remain an area for concern.

Despite winning his second CAF Champions League title with Al Ahly last season, Mosimane was accused of prioritising the continental showpiece over the domestic campaign.

Mosimane’s ‘eye off the ball’ as his detractors have claimed, saw arch-rivals Zamalek beat them to the league title.

This season, Mosimane’s men have made an impressive start to the league and have lost once in their 13 matches to date.

However, they have stumbled of late with the Red Eagles failing to win any of their last three outings. They have found the back of the net on just one occasion as their strikers – Percy Tau included – fire blanks.

Wednesday saw another toothless display from Mosimane’s Al Ahly men as they played out a goalless draw at home by 11th-ranked Tala’ea El Gaish.

“We are sad that we didn’t win tonight but we tried. We missed a lot of chances. We tried to win; however, if we have continued playing for one more hour we wouldn’t have scored. We made more than one attacking substitution but still we weren’t able to score,” Mosimane told journalists post-match.

“We have too many games to play, but that is still not an excuse. We weren’t energetic enough today. We can’t say today that we were tired. I don’t want to make excuses. We played most parts of the game in their half and failed to score.”

Percy Tau started the match but was substituted in the 69th minute.

Al Ahly are now three points behind leaders Zamalek in the standings, but do have two matches in hand.

Al Ahly will next be in action away from home against 12th-ranked Ceramica Cleopatra on Saturday, 30 April at 21:30 (SA time).