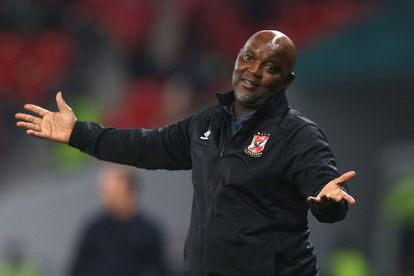 The giants of Saudi Pro League football are now in the second-tier and they need a man with the Midas touch.

They haven’t been afraid to sack managers when things weren’t going according to plan, either. All in all, Al-Ahli has had a total of 14 coaches since Aptil 2018. Yes, FOURTEEN, coaches in just over four years. The “hire and fire” approach doesn’t seem to be working for them at present.

They’ve still got nothing on Chippa United though…

Pitso Mosimane has the pedigree to turn around Al-Ahli fortunes

Pitso Mosimane will be under no illusions about the size of his task, but let’s remember that this is a man who steered Al Ahly of Egypt to consecutive CAF Champions League crowns in 2020 and 2021.

After coaching at SuperSport United, Mamelodi Sundowns and Al Ahly in Egypt, the Al-Ahli post is a first job outside the African continent for Pitso Mosimane.