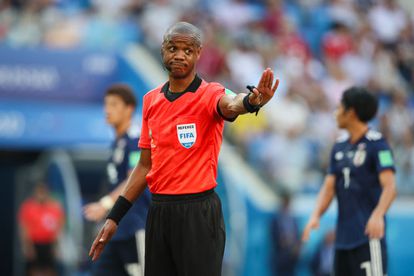 In scenes that were barely believable, Zambian referee Janny Sikazwe fist blew the full time whistle after just 85 minutes of play in the Afcon clash between Mali and Tunisia. He then restarted the game before eventually calling full time before 90 minutes had elapsed, while there was no stoppage time at all.

FULL LIST: ALL THE DEALS DONE IN THE DSTV PREMIERSHIP JANUARY WINDOW!

Mali went on to win the match thanks to a penalty scored by Ibrahima Kon, but the Tunisia camp was understandably infuriated after the game, with security eventually having to safeguard the officials.

As it is, matters became even more bizarre when the post-match press conference with Mali coach Mohamed Magassouba was then interrupted as CAF officials barged in to state that the match will be re-started to play out the final three minutes.

However, Tunisia declined to come out for the final five minutes which CAF wanted to be played out because the decision had been taken when the post-match press conference was on. Mali were therefore declared 1-0 winners.

It was subsequently reported that Sikazwe was confirmed to have suffered heat stroke, which led to his mistakes as the match drew to a close.

He has since revealed that he was told by medical professionals that he could have died.

“I have seen people going for duties outside the country and come back in a casket,” he said, as quoted by BBC Sport Africa.

“I was very close to coming back like that. I was lucky I didn’t go into a coma. It would have been a very different story.

“I think God told me to end the match. He saved me.”

There was controversy surrounding Sikazwe prior to the AFCON incident

In 2018, Caf provisionally suspended Sikazwe on suspicion of corruption following the way he handled the Caf Champions League match which Esperance won 4-2 in Rades.

Sikazwe, who refereed at the 2018 Fifa World Cup, awarded a controversial penalty which led to Esperance’s first goal after adjudging Algerian forward Mohamed Belaili to have been fouled by Agosto defender Jose Macaia.