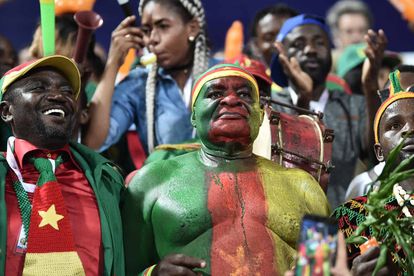 The delayed 2021 AFCON finally kicks off on Sunday, 9 January after a year-long delay due to the ongoing Covid-19 pandemic. Photo: OZAN KOSE / AFP

The delayed 2021 AFCON finally kicks off on Sunday, 9 January after a year-long delay due to the ongoing Covid-19 pandemic. Photo: OZAN KOSE / AFP

The delayed 2021 Africa Cup of Nations (AFCON) finally kicks off on Sunday, 9 January after a year-long delay due to the ongoing Covid-19 pandemic.

Despite negativity once again being levelled at the tournament by some elite-level European-based managers due to player unavailability, the world’s second-biggest continent is set to put on a show for the 33rd edition of this competition.

One nation expected to fight their way through to the latter stages is Cameroon, who host AFCON for the first time in 50 years.

The five-time winners enter as fourth-favourites to hoist the trophy this time around according to a plethora of bookmakers, and it’s not difficult to see why with a glance towards their strong squad.

Heading into this competition on the back of four straight competitive victories, Cameroon have looked incredibly solid in defence in particular.

That’s because they’ve managed to keep three clean sheets across that four-game stint and have conceded just 0.43 goals on average across their last seven competitive internationals (W5, D1, L1).

This opening fixture is unlikely to prove plain-sailing for the hosts though, as Burkina Faso make the relatively short trip east for this clash in Cameroon’s capital, Yaoundé.

The visitors arrive as FIFA’s 60th-best ranked nation – just 10 spots below the hosts (50) – and will be looking to go a game further than their third-placed finish at the 2017 AFCON tournament.

Their preparation for this edition couldn’t have gone much better, after losing just one competitive outing since March 2019 (W9, D8), and keeping 11 clean sheets in the process.

The last head-to-head clash also came during that run, a 0-0 stalemate that made it three competitive draws in a row versus Cameroon.

Burkina Faso have scored two or more goals in six of their last seven competitive victories.

‘Sundowns will lead with 20 points’ – Middendorp

School calendar 2023: Year starts for these FIVE provinces next week