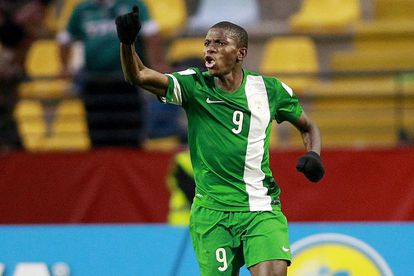 Nigeria have selected Napoli striker Victor Osimhen as part of its 28-man squad for next month’s Africa Cup of Nations (AFCON) in Cameroon. Photo: AFP

Nigeria have selected Napoli striker Victor Osimhen as part of its 28-man squad for next month’s Africa Cup of Nations (AFCON) in Cameroon. Photo: AFP

Nigeria have selected Napoli striker Victor Osimhen, who is still recovering from a serious injury, as part of its 28-man squad for next month’s Africa Cup of Nations (AFCON) in Cameroon.

Osimhen looked certain to miss the tournament, which is scheduled to kick off in Cameroon on January 9, after initially being ruled out for three months following surgery on face fractures suffered against Inter Milan in late November.

He suffered the fractures following a clash of heads with Inter defender Milan Skriniar, and had titanium implants placed in his cheekbone and eye socket.

The 22-year-old striker had already said would be ready to travel to Cameroon even though his Italian club would prefer he stayed away.

The Nigeria squad also includes Spain-based midfielder Kelechi Nwakali, who has yet to make his official debut for the Eagles.

Watford winger Emmanuel Dennis has been recalled. He last played for his country in a 2021 Nations Cup qualifier in Sierra Leone in November 2020.

Union Berlin striker Taiwo Awoniyi, who made his full international debut against Cape Verde in November, will have another chance to stake a claim for a place in the team after his fine form in the German Bundesliga.

One one player in Super Eagles squad plays in Nigeria

Enyimba goalkeeper John Noble is the only player from the country’s domestic league, the NPFL.

The Africa Cup of Nations is gearing up for its start against a backdrop of persistent rumours that it could be called off or postponed after already having been delayed by a year due to the Covid-19 pandemic.

Europe’s top clubs have threatened to refuse to release their African players for the event due to concerns over the Covid-19 health protocol.