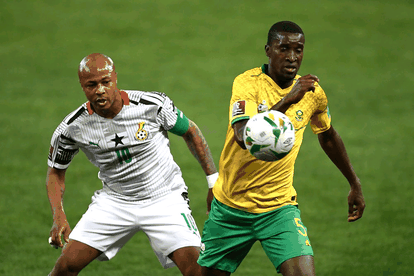 Ghana dropped points once again at the 2021 Africa Cup of Nations after being held to a 1-1 draw by a stubborn Gabon side.

The Black Stars failed to win their second consecutive match in Cameroon however their draw against Gabon was marred by a mass brawl after full-time.

Ghana’s Benjamin Tetteh recieved a straight red following full-time for his part in the post-match punch up and you can take a look at the incident below.

“We had the ball out, because our man was on the floor ,we expected them to give us back the ball but they went on to score. I am very disappointed in Gabon” – Ghana captain Andre Ayew said following the match.

Ghana’s captain Andre Ayew opened up the scoring in the 18th minute with a superb finish from range however, a late Jim Allevinah strike meant both teams will walk away with a point.

Earlier today, Morocco earned a 2-0 victory over Comoros taking them to the top of the group with six points while Gabon sit in second place on four.

Ghana now run the risk of an early elimination if they fail to secure maximum points against Comoros in their final AFCON group match!

READ NOW: KAIZER CHIEFS HAVE COMPLETED THEIR FIRST SIGNING OF THE TRANSFER WINDOW, A 15-YEAR-OLD STAR!