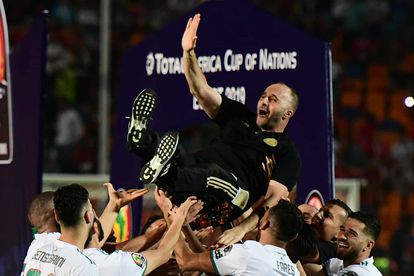 Riyad Mahrez-captained Algeria were crowned African champions a second time after a tournament in which many rival coaches picked them out from early on as the best of the 24 title challengers.

Benin stunned Morocco in the round of 16, winning 4-1 on penalties after playing most of extra time with 10 men following the red-carding of Khaled Adenon.

Defending champions Cameroon were eliminated by Nigeria in a second round match that was among the most exciting in the tournament and the loss cost coach Clarence Seedorf his job.

The Democratic Republic of Congo achieved the biggest win of the tournament by thrashing Zimbabwe 4-0 in Group A with Cedric Bakambu bagging a brace.

The new 24-team format — up from 16 in the previous tournament — did deliver excitement with the best four third-place qualifiers decided only after the last two group matches.

A run of six consecutive top-four finishes by Ghana came to an end as they lost a last-16 penalty shootout against Tunisia after Caleb Ekuban had his kick saved.

Near 40 celsius (104 fahrenheit) heat when some mid-afternoon matches kicked off was blamed for the often cagey, snail-pace football.

Nigerian Odion Ighalo completed a double by finishing as the leading scorer at the finals with five goals having topped the qualifying scoring chart with seven.

Playing in June and July for the first time instead of January and February meant hundreds of African stars avoided having to choose between their country and European club.

Back at the Cup of Nations after 15 years, Kenya had the satisfaction of defeating east African neighbours Tanzania in a thriller, but were outclassed by Algeria and Senegal.

Starting for the first time in the tournament, South African Thembinkosi Lorch scored the goal that shattered Egyptian dreams of a record-extending eighth title.

Pre-tournament outsiders Madagascar shocked Nigeria to top Group B, then won a penalty shootout against DR Congo before a jaded side fell to Tunisia in the quarter-finals.

Nigeria finished third for the seventh time to satisfy coach Gernot Rohr, but not some supporters who criticised the selections and tactics of the German.

There were four own goals in the 52 matches with Tunisians Rami Bedoui and Dylan Bronn, Namibian Itamunua Keimuine and Nigerian William Troost-Ekong the unfortunate quartet.

The overall quality of the football at the showpiece of African football was often pedestrian with far fewer memorable matches than forgettable ones.

A run of winning every other Cup of Nations from 2012 ended for French coach Herve Renard when Benin stunned Morocco, whose squad had seemed among the strongest.

Sadio Mane-inspired Senegal reached a second final and once again experienced the bitterness of defeat having lost a penalty shootout against Cameroon 17 years ago.

Tunisia finished fourth despite winning only one of seven matches, a 3-0 last-eight drubbing of Madagascar. They drew their first four games and lost the last two.

It’s also for trophy. Which Algeria lifted on Friday.

Uganda did best of the east African qualifiers, finishing second behind Egypt in Group A before stretching Senegal, then they lost coach Sebastien Desabre to Egyptian club Pyramids.

VAR (Video Assistant Referee) made its Cup of Nations debut from the last-eight stage and was used mainly to judge handballs with the chief complaint being slow decision making.

The scorching weather, with 30-plus  celsius (86 fahrenheit) temperatures even for night matches, was among the reasons given by the organisers for the many low attendances.

Many of the 24 teams in Egypt lacked players with the x factor as coaches emphasised teamwork and organisation over individual brilliance.

The most costly yellow card of the tournament was shown to star Senegal defender Kalidou Koulibaly in the semi-final win over Tunisia as it barred him from the final.

Zimbabwe captain and forward Knowledge Musona was guilty of the miss of the tournament, failing to score from in front of an open goal during a Group A draw with Uganda.