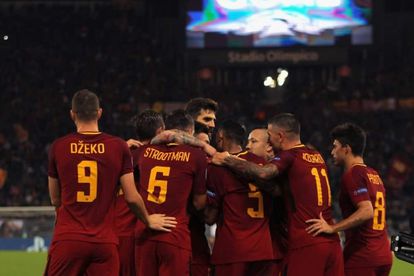 ROME, ITALY – OCTOBER 31: Stefan El Shaarawy with his teammates of AS Roma celebrates after scoring the team’s second goal during the UEFA Champions League group C match between AS Roma and Chelsea FC at Stadio Olimpico on October 31, 2017 in Rome, Italy. (Photo by Paolo Bruno/Getty Images )

ROME, ITALY – OCTOBER 31: Stefan El Shaarawy with his teammates of AS Roma celebrates after scoring the team’s second goal during the UEFA Champions League group C match between AS Roma and Chelsea FC at Stadio Olimpico on October 31, 2017 in Rome, Italy. (Photo by Paolo Bruno/Getty Images )

Roma leapfrogged English champions Chelsea at the top of Group C in the UEFA Champions League with a thumping win at the Stadio Olimpico.

Stephan El Shaarawy ruined the Blues’ night in Rome within 40 seconds as he boomed a right-footed effort inside the left-hand post. He doubled the pain just over half an hour later when he prodded past Thibaut Courtois for the second.

Diego Perotti made it three when he was afforded far too much space following a dud pass from Cesc Fabregas.

Antonio Conte’s side will breath a sigh of relief though, after group rivals Atletico Madrid continued to struggle, limping to a 1-1 draw with FK Qarabag at the Wanda Metropolitano.

Paris Saint-Germain are home and hosed in Group B after taking Belgian side Anderlecht to pieces, thanks mainly to a second half hat-trick from Layvin Kurzawa.

Marco Verratti curled in the opener, before Neymar cracked in a beauty from the edge of the area to make it two. Kurzawa then took centre stage with an unlikely treble after the break.

Callum McGregor pulled off a shock equaliser after the break, but parity lasted a matter of minutes as Javi Martinez headed the decisive goal.

Teenage Benfica keeper Mile Slivar went from hero to zero against Manchester United, as he saved an Anthony Martial penalty before Nemanja Matic’s long-range strike came back off the post, off the back of Slivar and into the back of the net at Old Trafford.

Daley Blind had more success from the spot after 78 minutes, as he slotted home to take United through to the last 16.

Basel remain second behind the Red Devils in Group A despite giving up a one goal lead to lose at the hands of CSKA Moscow at St Jakobs-Park.

Gonzalo Higuain struck with 12 minutes to go as Juventus rescued a point in Portugal against Sporting.

The hosts looked like springing a surprise when Cesar Zanaki tucked home after 20 minutes, but the Argentinian’s leveller kept the Serie A champions ahead in the race to qualify from Group D.

Group leaders Barcelona played out a goalless draw in Athens against bottom-of-the-pile Olympiakos, keeping them three points clear at the top.