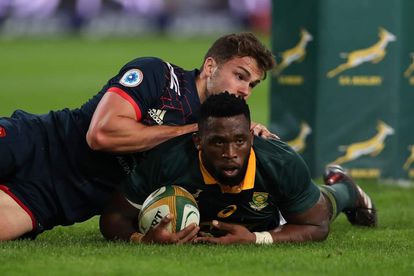 Siya Kolisi’s solid performances in the midst of a rather indifferent year for the Boks have won him the admiration of his peers as he walked away with the SA Player’s Player of the Year Award at the Players Choice Awards on Tuesday night.

The Stormers’ captain was a thorn in the opposition’s flesh and a consistent performer as he took part in all but one of the Springboks’ Tests in 2017, only missing the big away win against Italy when he had to return home for the birth of his second child. He was back in the fold a week later, captaining the side as they staged a spirited second half comeback in the narrow defeat to Wales after the loss of regular captain Eben Etzebeth to injury.

Specman and Mapimpi also walked away with awards in other categories, respectively grabbing the Backline Player of the Year as well as the #LoveChange award which is given to the most improved player over the past year.

Kolisi and Etzebeth have also been nominated for SA Rugby’s Player of the Year award, along with Bok teammates in hooker Malcolm Marx, as well as centre duo Jaco Kriel and Jan Serfontein.

Also read: Black-Boks Thinking: redemption from the wreckage of two years under Allister