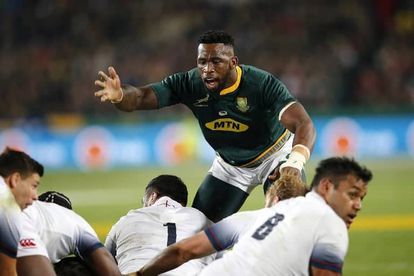 Springbok coach Rassie Erasmus has backed Siya Kolisi to captain the side in next year’s Rugby World Cup in Japan.

The Stormers flanker made history in June this year when he became the first black African to lead the Boks when they squared off at Ellis Park against England in the first of three Tests.

With less than a year to go before the global showpiece event – the first held in Asia – Erasmus revealed that he was yet to decide on who would captain the side next year, but tipped Kolisi as a strong contender to do so.

“You know, I could make that call now and then I’m not even there as coach next year. Look at how I was under the pump two weeks ago.

“Let’s take it week-by-week for now. Next year, going into the Rugby Championship, we should know who our captain is. But hell, going by what he’s done thus far, Siya is a strong contender. He’s been very impressive.”

Could Kolisi buck the trend?

Should Siya Kolisi continue captaining the side going into the World Cup, he would be bucking a recent trend of Springboks captains not making it past their first season as leaders.

In the three years since the last world cup, four men have skippered the side, starting with former Bulls hooker Adriaan Strauss, who was handed the reins in 2016 before retiring that year.

Eighthman Warren Whiteley took over the following year, but his stint was cut short by an injury which saw him out of action for the rest of the international season, with Eben Etzebeth leading the side until he himself broke down in the Boks’ last Test of the year against Wales in Cardiff.

Kolisi had his first taste of Bok captaincy when he took over from Etzebeth in the Cardiff Test, but did not travel to Washington for the first match under Erasmus, as the reins were handed to Stormers teammate Pieter-Steph du Toit when the Springboks took on Wales in Washington earlier this year.

He began his captaincy stint on a more permanent basis during the 2-1 series win against England, and is well set to lead the men in green and gold to their best finish in the Rugby Championship since the 2014 edition of the competition.

With two matches left to play, the Springboks are second behind the All Blacks, with a six-point difference between the two teams.