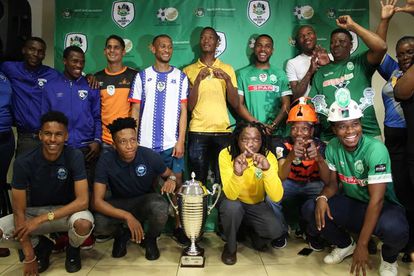 The KwaZulu-Natal based Premier Soccer League and National First Division clubs will battle for the KZN Premiers Cup pre-season tournament from 27-28 of July 2019. Photo: supplied

The KwaZulu-Natal based Premier Soccer League and National First Division clubs will battle for the KZN Premiers Cup pre-season tournament from 27-28 of July 2019. Photo: supplied

The three Kwazulu-Natal based Premier Soccer League clubs will vie for the Premier’s Cup this weekend alongside four teams from the National First Division.

The Premier’s Cup will start at the Princess Magogo Stadium in KwaMashu on 27 July and the semi-finals and final will be played at King Zwelithini Stadium in Umlazi on 28 July.

The KwaZulu-Natal provincial government has set aside R4-million to assist the clubs with their pre-season preparations and all the teams agreed to split the money meaning each team will get R585 000.

In return, the clubs have agreed to assist the province by taking part in coaching clinics and sport equipment handovers in selected schools in KZN.

“It will expose young people into the world of football, but it should not be occasionally, in fact we want all the teams to adopt the  particular set of schools beyond the social responsibility that you do after this tournament so that you know in the entire year, you are responsible to discover talent in these schools,” said KZN MEC of Education Kwazi Mshengu .

Steve Khompela’s Lamontville Golden Arrows will enjoy a bye through the quarterfinal stage as the KZN team that finished highest in last season’s domestic league.

Maritzburg United have been handed a rematch against Royal Eagles whom they faced in the Promotion/relegation playoff at the end of last season. The Team of Choice easily saw off Eagles last time out and coach Eric Tinkler is keen to win a first trophy with the club he saved from the drop.

“For me, this going to be my first premier cup involvement and being the type of person I am I hope I can win this competition and start the season well.”

“The must-win environment that is created makes it difficult for coaches to take the risk of bringing in younger players, but I am a big fan of youth development,” he said.

Relative newcomers to the NFD Uthongathi FC will be eager to upstage their big-city rivals Amazulu when they meet on Saturday in a stadium both use as their home ground occasionally. Arrows await the victors on Sunday.

There will be at least one side from the NFD in the semi-finals with Richards Bay FC taking on Real Kings in the second of three quarterfinals.

Sunday’s matches will be broadcast live on Supersport. Entrance to the stadiums is free on both days.