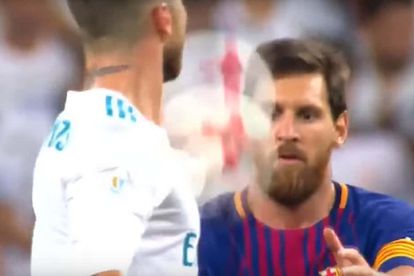 ramos messi troll super cup what did he say

ramos messi troll super cup what did he say

Yhu, guys, Sergio Ramos left all his chill in the change room when Real Madrid played Barcelona in the Spanish Super Cup.

The two sides squared off on Wednesday night, with Real Madrid shrugging off the absence of the suspended Cristiano Ronaldo (banned for five games after pushing a referee).

Real Madrid won 2-0 in the second leg, taking them to a 5-1 win on aggregate and sealing the Super Cup.

Marco Asensio and Karim Benzema found the back of the net for Real Madrid, but it’s not just the big win that made headlines.

This little interaction between Sergio Ramos and Lionel Messi had soccer fans in stitches (or in fury, depending which side of the coin you’re on).

What did Messi say to Ramos?

We can’t lip-read in Spanish, but if some of the reports from Spanish media are to be believed, it was very sweary and quite offensive. We’ll let you use your imagination for this one…