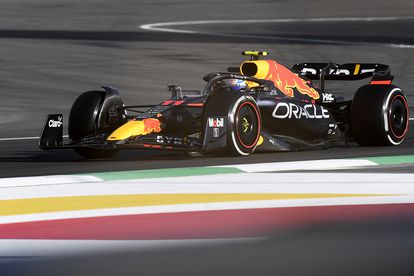 epa09849194 Mexican Formula One driver Sergio Perez of Red Bull Racing during a practice session for the Formula One Grand Prix of Saudi Arabia on the Corniche Circuit in Jeddah, Saudi Arabia, 25 March 2022. EPA/STR

epa09849194 Mexican Formula One driver Sergio Perez of Red Bull Racing during a practice session for the Formula One Grand Prix of Saudi Arabia on the Corniche Circuit in Jeddah, Saudi Arabia, 25 March 2022. EPA/STR

Red Bull’s Sergio Perez will start from pole for the first time in his career when the Saudi Arabian Grand Prix gets underway from 19:00 (SAST).

Perez the man of the moment

Sergio Perez claimed his first ever Formula One pole at the 215th attempt when the Mexican upstaged Red Bull teammate and world champion Max Verstappen in qualifying for the Saudi Arabian Grand Prix on Saturday.

Ferrari’s Charles Leclerc joins Perez on the front row with Verstappen on the second row after qualifying in fourth behind the other Ferrari of Carlos Sainz.

Saturday’s qualifying was marred by a horror crash suffered by Mick Schumacher, which ruled him out of the race, and Lewis Hamilton’s shock elimination in the opening Q1 session for the first time since 2017.

It was a dramatic session coming just hours after it was confirmed the weekend action would go ahead following lengthy talks overnight about racing in the aftermath of Friday’s missile strike by Yemen’s Huthi rebels on the nearby Aramco fuel plant.

“It took me a couple of races! But what a lap man, it was unbelievable!” said Perez, the first Mexican to head an F1 grid.

Verstappen described his first lap in Q3 as “terrible”, adding: “I didn’t really feel comfortable. Checo did a great job today and I am very happy for him.”

Starting grid for Sunday’s Saudi Arabian Grand Prix, the second round of the 2022 Formula One world championship:

Will not start: Mick Schumacher (GER/Haas-Ferrari)