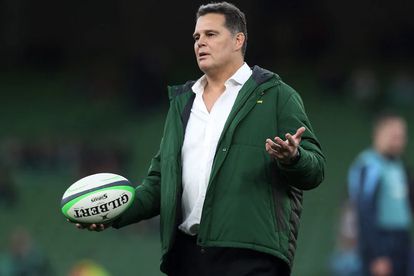 World Rugby head of match officials, Joël Jutge, has denounced Rassie Erasmus’ controversial use of social media which he believes is aimed at referees.

Erasmus has cut and tweeted several video clips highlighting officiating discrepancies over the course of the Springboks’ two defeats to Ireland (19-16) and France (30-26).

And even though Erasmus has come out and said he is not targeting referees or any match officials with social media entries, he was been on the receiving end of widespread criticism and is being branded a sore loser.

World Rugby have been notably silent on the matter but in an interview published on RugbyRama, there have been some noteworthy comments made by Joël Jutge, who is head of the organisation’s match officials.

“All referees are affected by these attacks on referees in general and Wayne Barnes last weekend. Because by doing so, Rassie Erasmus opens the door to violent behaviour and behind it, entire families are insulted and affected. It is extremely dangerous. But some people think that if the South African coach talks about a referee like that, they have the right to do it too…” Jutge said.

“His attitude is a concern for World Rugby and Rassie Erasmus’ peers do not share his way of doing things. It is contrary to our values, even if this word is sometimes overused. Erasmus does not serve his cause and it is surprising to see him continue in this way“