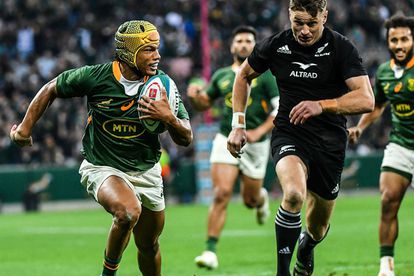 Last month, Arendse was suspended from all forms of the game up to and including 17 September 2022 following the well-publicised incident with Beauden Barrett, which saw the Bok wing accidentally take out the All Blacks star while he was jumping to catch a contestable kick.

Arendse returned for last Saturday’s clash against the Pumas and scored a memorable try off the bench, reminding the Bok coaches why he simply has to be included among the end-of-year touring group.

“It would be fantastic to be back in the mix for the year-end tour,” he commented. “It’s going to be a tough tour against challenging opposition, so it would be great to have the opportunity to test ourselves against them.

“It is very special to be part of this group of players. I was out and Canan (Moodie) came in and did the job on the wing, so it was good to be back for the final Test, and that made scoring the try even more special.

“In my time off it made me think a lot about my rugby, what I would like to improve on and reflect on a few things. So, it was good for me, and it made it made me even more hungry to return to action.”

The Springboks departed for their franchises and clubs following Saturday’s Test, and while some players will enjoy a short break, others will run out for their respective clubs and franchises in the next few weeks before the squad assembles for their preparation camp for the year-end tour at the end of October.

“Having conducted a detailed review of all the available evidence, including all camera angles and additional evidence, including from the player and submissions from his legal representative, Attie Heyns, the Foul Play Review Committee upheld the red card under Law 9.17.

“With respect to sanction the Foul Play Review Committee considered the act of foul play was reckless, highly dangerous and had a considerable impact on the victim player.  The Committee accepted it was not deliberate and after considering all relevant factors decided the foul play merited a mid-range entry point of 8 weeks. However, taking into account mitigating factors including the Player’s clean judicial record and his acceptance of guilt at the first available opportunity, the Foul Play Review Committee reduced the suspension to 4 weeks.”

“The player is therefore suspended for 4 weeks, up to and including 17 September 2022.”

All SANZAAR disciplinary matters are in the first instance referred to the Foul Play Review Committee to provide the option of expediting the judicial process.

For a matter to be dispensed with at this hearing, the person appearing must plead guilty and accept the penalty offered by the Foul Play Review Committee.