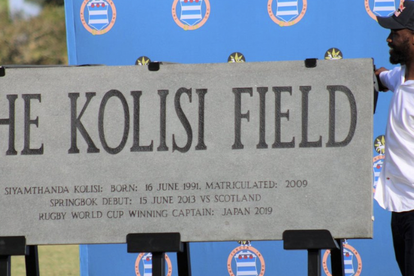 Springbok captain Siya Kolisi was honoured by his former high school when they renamed their main rugby field after him. The ceremony to mark the occasion took place at the Grey High School’s Reunion weekend.

The current Philip field will, going forward, be known as The Kolisi Field in recognition of the 2019 Rugby World Cup-winning captain’s exploits as skipper of the national team.

You can watch the video involving the unveiling of the Kolisi Field below:

Grey PE’s rector, Chris Erasmus, recently explained in an interview with Sport24 that the move to rename the Philip Field to the Siya Kolisi Field was in the pipeline since 2018, and has shared more information around what the reasoning is behind the decision.

“There was huge support for the move and the first time we spoke to Siya about it was in 2018 when we were looking to change the name of the field, even before the World Cup,” Erasmus said.

“The World Cup gave the name change even more momentum. We consulted all the parties involved, including the Philip family.

“Mr Philip contributed the money for the flattening of the field. We wouldn’t have had the field without them.

“It’s a big thing and we didn’t want to do it quietly during Covid-19. With this year, everything is possible and we can do it now…

“It has such importance and impact on the country. We have to be proud of the fact we’ve contributed to the country in that manner.

“The impact that may have on future young men to go play on that field also can’t be underestimated from a representation perspective.

Kolisi attended Grey High in current day Gqeberha (formally Port Elizabeth) until matric and played in the school’s First XV in both 2008 and 2009.

Kolisi, who will turn 31 on Youth Day (16 June) this year, grew up in Zwide, a township outside of Gqeberha.

He was named captain of the Springboks on 28 May 2018, becoming the first black player to hold the position.