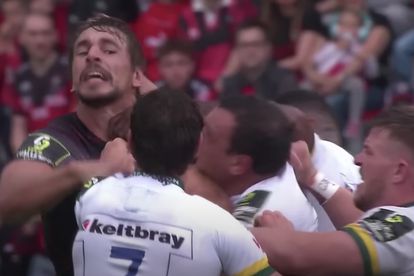 However, there was an ugly altercation just before half-time when several players became involved in an off-the-ball brawl, with Etzebeth coming to the defence of his Toulon teammates.

Although there was mainly just plenty of pushing and shoving between players, Etzebeth could also clearly be seen having his hair pulled by former Argentina captain Agustin Creevy.

You can watch the clip involving Etzebeth and Creevy below:

Kolisi and Etzebeth are known as two of the closest friends in world rugby, having played plenty of rugby from their days at the Stormers through to the Springboks.

The two forwards will also be reunited at the Sharks when Etzebeth makes the move to Durban later this year on a long-term contract with the coastal franchise.

In a fascinating and wide-ranging podcast, Kolisi has shared a comical anecdote about how tough it is to train against and tackle Etzebeth.

In another story related to Etzebeth, he has said that him and Bakkies Botha have moved past the spat that grabbed headlines in February. Etzebeth had responded angrily after Botha had suggested the Bok lock wasn’t committed to making a success of his time with Toulon in France.

“When I retire one day I won’t go around saying things about fellow Boks, so I was caught a bit off guard,” Etzebeth told Jim Hamilton in a video interview for RugbyPass published on Sunday.

“As players we get quite a lot of grief from fans, and now one of your own are also giving you some sh*t. I was a bit angry, surprised and disappointed in the comments.

“We spoke after that and all sorted, there’s no hard feelings. Bakkies rang me, and we spoke and he said it was taken out of context a bit. I also read the article. We solved it and when we see each other in South Africa again we’ll have a beer.”

How to deal with unruly behaviour among school children.

Stage 6 load shedding: Tips to cope during dark times ahead

July SASSA payment dates: Here’s when you can collect your grants