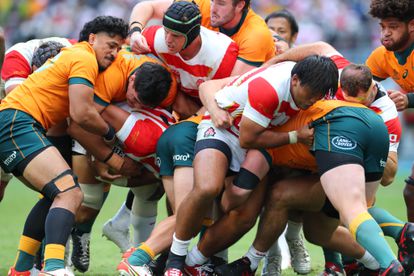 Australia warmed up for their rugby tour of Europe with a nervy 32-23 victory over Japan in Oita on Saturday, the Wallabies’ fifth successive Test win.

The in-form visitors took an early lead with first-half tries from Tom Wright and substitute Jordan Petaia, but Japan hit back with one of their own from Lomano Lava Lemeki.

Tries from Taniela Tupou and Rob Leota early in the second half put Australia back in control, but Japan refused to be shaken off and Ryoto Nakamura crossed the line to set up a tight finish.

The Wallabies held on and now travel to Europe, where they will play Scotland, England and Wales.

Japan also head off on tour to take on Ireland, Portugal and Scotland.

READ | FAF DE KLERK HAS HIP SURGERY, OUT FOR 4 MONTHS

Australia looked to be cruising towards a comfortable victory after scoring two tries in the first 25 minutes.

Wright took a pass from playmaker Quade Cooper before darting past the Japan back line to touch down in the seventh minute.

Petaia, a 14th-minute substitute for injured fullback Reece Hodge, then found himself in acres of space to cross the line in the corner.

But Japan replied minutes later when stand-off Rikiya Matsuda’s cute kick found Lomano Lava Lemeki on the touchline, and the winger outmanoeuvred Wright to score for the home side.

Australia went into half-time with a 17-13 lead, but Tupou gave them some breathing space minutes after the restart when he barged over for a try.

Leota then put the Wallabies further in front, latching onto a long behind-the-back pass from Cooper.

But Australia saw the downside of Cooper’s mercurial play five minutes later, when Nakamura intercepted his long pass and raced clear for a try.

Yu Tamura kicked a penalty with six minutes remaining to cut the gap to four points and set up a nail-biting finish.

But Australia substitute Connal McInerney sealed the win with a late try, barging over with a minute to go.

Pitso Mosimane and Cristiano Ronaldo’s paths to align in 2023?