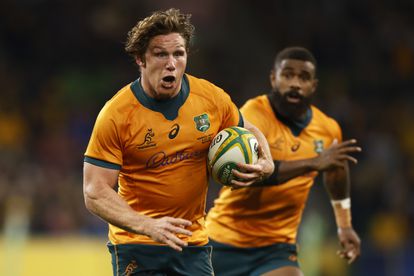 Wallabies coach Dave Rennie has called up France-based second-rowers Will Skelton and Rory Arnold, along with hooker Tolu Latu, for their upcoming European tour. Photo by Daniel Pockett/Getty Images

Wallabies coach Dave Rennie has called up France-based second-rowers Will Skelton and Rory Arnold, along with hooker Tolu Latu, for their upcoming European tour. Photo by Daniel Pockett/Getty Images

Embattled Wallabies coach Dave Rennie has insisted his team are “learning quickly” despite being handed yet another masterclass by the mighty All Blacks.

The Australians have lost three times to New Zealand in the space of a month to meekly surrender the Bledisloe Cup, with their 38-21 defeat in Perth on Sunday again marked by mistakes, inaccuracy and poor decision-making.

They have barely a week to pick up the pieces before facing undefeated world champions South Africa on the Gold Coast as the pandemic-hit Rugby Championship moves to Queensland.

Since taking the reins in late 2019, New Zealander Rennie has overseen six defeats, three draws and just three wins, but he remains optimistic his relatively young side is making progress.

“I came in (to the job) with my eyes open and we’ve got a lot of good men who are working really hard,” he said on Sunday.

“We’ve had seven Tests against the All Blacks (since he took over) and ultimately I think that’s great for us. We’re learning quickly. We’ve got the world champions coming up for a couple of Tests and that is going to be great for us as well.”

“But we’ve got to be better at putting ourselves in a position to win these games,” he added.

“We’ve got to be clinical, we’ve got to look after the ball, there were way too many turnovers post-tackle and we were really reluctant to kick (on Sunday).”

The defeat came despite New Zealand missing a slew of stars, including Aaron Smith and Richie Mo’unga, and having their preparations interrupted by a “soft” coronavirus quarantine in Australia where they were they were only allowed out of their hotel for training sessions.

They nevertheless proved devastating on the attack, running up an 18-0 lead by half-time despite fullback Jordie Barrett being red-carded when his boot made contact with Marika Koroibete’s face as he leapt for the ball.

“We felt it was a pretty even first half, we were down 18-0 but we got over the line a couple of times that were denied,” said Rennie.

“We felt that if we could score first (in the second half) we could get ourselves back into the game.”

Despite his optimism, there was no way back against a well-oiled team that has a factory-line of top-quality players as cover when key names are missing.

They also head to the Gold Coast for their next Rugby Championship clash, against Argentina in a double header with Australia and South Africa next Sunday.

Coach Ian Foster said he was “delighted” with how the team played and adapted to Barrett’s sending off.

“It wasn’t a picture-perfect game in many ways, but the attitude and commitment to run and to scramble was outstanding,” he said.

“The composure in the heat and with the red card I thought (captain) Ardie Savea and the guys on the park worked well through that and when Ardie left, it got carried on by Guzz (Brodie Retallick) and Beaudy (Barrett). I’m pretty delighted.”