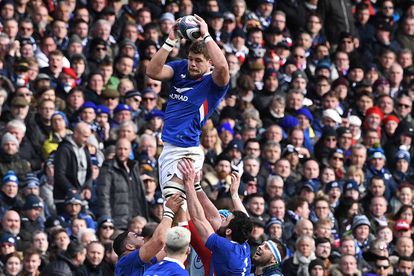 Wales won the Six Nations on Friday after Scotland beat a “disappointed” France 27-23 for their first victory in Paris since 1999.

Both sides finished with 14 men after Scotland fly-half Finn Russell was sent off with 10 minutes to play and French substitute Baptiste Serin collected a yellow card three minutes later.

“We’ll continue to work, we know where we’ve come from, we’re going to get back to work. It will help us grow,” he added.

Scotland coach Gregor Townsend was without a host of English-based players with the game outside the Test window and lost No. 8 Matt Fagerson on the eve of the game with an ankle injury

“I’m so proud of the team. They came here with a bit of adversity with not our full squad, an injury to one of our starters, a yellow card, a red card, we had to come back against a very good side,” Townsend told the BBC.

“But they showed courage, effort, togetherness, and skill to win. A great end to a really promising season for us,” he added.

The match had been rescheduled after a Covid-19 outbreak in the French camp caused a postponement in February.

As the rain fell at the Stade de France, Brice Dulin showed his side’s intent by taking a quick lineout inside his own five metres within 60 seconds.

After nine minutes Romain Ntamack opened the scoring with a penalty but the away side dominated the following quarter of an hour.

The visitors’ control and patience was rewarded after 15 minutes as van der Merwe snuck over after two previous pick and goes.

Russell converted before adding a penalty for a 10-3 lead after 20 minutes as Townsend’s men intelligently controlled territory with delicate kicks while France made five early handling errors in greasy conditions.

When the downpour briefly stopped, Galthie’s men took a stranglehold.

Ntamack closed the gap to four points with a penalty before the hosts took the lead.

After a fourth scrum inside Scotland territory, Antoine Dupont found Damian Penaud on the right wing. He passed inside to Dulin who slid over.

Ntamack slotted the additional points to make it 13-10 before things worsened for Scotland when captain Stuart Hogg was shown a yellow card for a ruck infringement.

France started the second half superbly and made the most of the extra man as the rain stopped again.

Their pressure paid after 46 minutes as Penaud scored a fine individual effort after a chip and chase and a lovely Virimi Vakatawa offload.

Hogg returned as Russell closed the gap to five points with a penalty after 53 minutes before the visitors camped inside France territory with the clock ticking towards a Wales title win.

Les Bleus hopes of a title took a blow with a quarter of the match left as replacement hooker Dave Cherry dived over from a rolling maul for a third try in five Tests.

Russell was successful with a difficult conversion and Scotland led 20-18 before momentum swung back in France’s favour.

Ntamack missed the conversion making it 23-20 to the home side with a quarter of an hour left.

They still needed a fourth try and 18 points in the final 10 minutes but seemed to have been given a hand when Russell, who plays his club rugby with Paris’ Racing 92, shoved his elbow into Dulin’s neck trying to fend off the French fullback and received a red card.

But France were also reduced to 14 men shortly after when replacement scrumhalf Serin was shown a yellow card two minutes after coming on.

Scotland finished the strongest and capped off a gutsy display with van der Merwe claiming his second try sending his side fourth in the table.