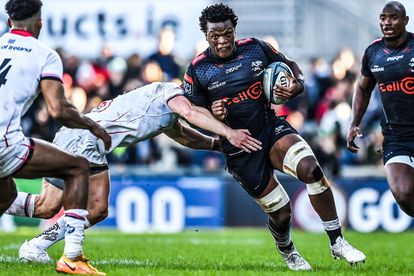 The Sharks went down fighting against a determined Ulster outfit in their final URC league match at the Kingspan Stadium in Belfast. Photo: SA Rugby website

The Sharks went down fighting against a determined Ulster outfit in their final URC league match at the Kingspan Stadium in Belfast. Photo: SA Rugby website

The Sharks went down fighting 24-21 against a determined Ulster outfit in their final United Rugby Championship (URC) league match at the Kingspan Stadium in Belfast on Friday, which could see them play an away quarter-final in two weeks.

The Sharks had opportunities to score in the first half after making their way close to the tryline on a few occasions, but they were unable to breach the strong Ulster defence.

The hosts, in turn, capitalised on their chances and scored a converted try by Michael Lowry (fullback), while John Cooney (scrumhalf) kicked a conversion and penalty goal to hand them a 10-0 half-time lead.

The second half was a completely different ballgame as the Sharks scored 21 points to 14 by the home side, compliments of tries by Ntuthuko Mchunu (replacement prop), Marius Louw (centre) and Grant Williams (replacement scrumhalf), but their efforts were too little too late in the crucial encounter, and they only managed to walk away with a losing bonus point for their efforts.

The Durbanites struck early on getting close to the tryline in the sixth minute and again a few minutes later, but mistakes at crucial times cost them dearly.

Ulster added the first try of the match in the 26th minute later as Lowry gathered a fantastic backdoor pass at pace to score a well-worked five-pointer following a good break close to the touchline, and. Cooney added the extra two to stretch their lead to 10-0.

Sharks flyhalf Curwin Bosch missed a penalty goal in closing minutes of the first half, but they continued to show their fight even though they were unable to add points before the break.

LIVE | BLITZBOKS IN ACTION AT THE TOULOUSE SEVENS

Ulster picked up where they left off three minutes into the second half as Stuart McCloskey (centre) barged through the defence to dive over for their second try, and the extra two points handed them an encouraging 17-0 lead.

The Sharks hit back strongly, stringing together phases on attack and using their forwards to force their way close to the tryline, and they chipped away at the defence for several minutes.

Sharks may have to settle for an away quarter-final

The rewards finally paid off early in the fourth quarter as Mchunu forced his way over the line thanks to fantastic support play and Bosch converted to hand them their first points of the match.

Ulster centre James Hume made easy work of their third try as he took advantage of the unorganised defence, touching down with a clear tryline in front of him, to nudge them 24-7 ahead.

The visitors refused to give up and they reaped the rewards with Louw scoring their second try in the 75th minute and replacement flyhalf Boeta Chamberlain slotted the conversion to push them 10 points behind with minutes left to play.

This boosted their confidence as Williams dashed his way to the tryline in the 79th minute and the conversion saw them trail by three points, which secured their bonus point, in the dying seconds.

Unfortunately, the Durbanites’ couldn’t add to their score, leaving them to settle for a heart-breaking 24-21 defeat, and a possible away URC quarter-final.