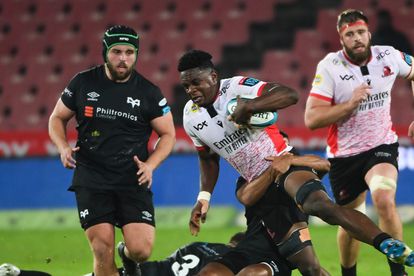 The Lions scored an impressive seven tries against Ospreys in their United Rugby Championship (URC) clash at Ellis Park in Johannesburg on Friday to secure their third win in a row with a convincing 45-15 victory.

Rabz Maxwane (wing) and Morne van den Berg (scrumhalf) accounted for their opening two tries in the first half thanks to some enterprising play, and the team backed this up with solid defence, which saw them limit Ospreys to one penalty goal for their efforts in the half for an encouraging 14-3 lead.

The second half, however, belonged to the hosts as they ran circles around the Welsh outfit and capitalised on their try-scoring chances to add another five tries, taking their tally for the match to seven, with Van den Berg earning his brace in the process.

The Johannesburgers displayed their intent from the outset as they ran hard on attack and backed this up with fine support play, and this almost saw them score in the opening minutes.

They missed another opportunity to earn points as Jordan Hendrikse (flyhalf) pushed his attempt at goal wide, but they found their rhythm soon after with Maxwane dashing around the last defender en route to the tryline in the 11th minute after a great pass out wide and some good interplay and passing.

Ospreys made their way close to the tryline late in the first quarter, but were shut out by the hosts, although they slotted a penalty goal by Josh Thomas in the 29th minute to reduce their deficit to four points.

Van den Berg had the last say in the half as he gathered a great pass to score under the posts, which saw them enter the tunnel 14-3 ahead at half-time.

Lions started off the second half with bang

The hosts started the second half with a bang as Francke Horn (flank) scored their third try in the 42nd minute after some intense pressure on attack meters from the tryline, increasing the lead to 21-3.

Ospreys scrumhalf Rhys Webb scored their first try of the match in the 49th minute after a gathering the ball from a ruck and sniping through thanks to a beautiful dummy pass, and Josh Thomas (flyhalf) added the extra two to push their score into double figures.

Van den Berg cancelled this out in the 54th minute as he touched down for his second five-pointer following a brilliant break in the midfield by Wandisile Simelane (centre) and a fine hand-off to the nippy No 9, which saw them take a 28-10 lead.

Ospreys hit back with an intercept try by Mike Collins (centre) in the 63rd minute, but this confidence was short-lived as Lions replacement back Manuel Rass crashed over after some hard work by Simelane, and Edwill van der Merwe added to this minutes later as he dashed through for their sixth try, handing the home side a convincing 38-15 lead.

The Lions did not stop there and added yet another try by Andre Warner (replacement scrumhalf) in the final minutes and this earned them a satisfying 45-15 victory.