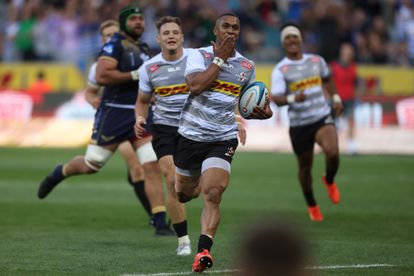 Stormers wing Leolin Zas in action in the URC.

Stormers wing Leolin Zas in action in the URC.

It was a weekend of success for three of the four local URC teams, with the Stormers, Bulls and Lions all claiming victories against Welsh opposition.

After the long international break, the Stormers restarted the URC season with an easy 36-19 win over the Scarlets at Cape Town Stadium on Friday.

On Saturday, the Bulls hammered the Ospreys 43-26 at Loftus in Pretoria. And a day later, the Lions ground out a hard-fought 33-25 victory against the Dragons at Ellis Park.

And with the Sharks scheduled to play to play later that same day, the four South African franchises were on track to make it a clean sweep against the four Welsh regions. But Cardiff upset the apple cart in Durban in the last match of round eight.

STATE OF THE URC TABLE

In the process, the four teams at the top of the standings have opened up a slight gap on the chasing pack, with the Bulls and Stormers – last season’s finalists both of whom collected five log points this weekend – in hot pursuit of two Irish teams, unbeaten Leinster in first and Ulster in second place on the ladder.

The Lions won their first home game of the season when they overcame Dragons, but the Sharks were the only team that lost at home this weekend after they were blanked by an impressive Cardiff in the final match of the round.

With the halfway mark of the regular season moving into view, Leinster lead the race with 38 points from eight games, followed by Ulster (30 points from seven games), the Bulls (29 from eight) and the Stormers (29 from seven).

The Emirates Lions occupy seventh position with 19 points from seven games, but the Sharks have dropped to 12th with 15 points from their six games.

In other results from round eight, Leinster hammered Glasgow Warriors 40-5, Ulster were too good for Zebre (36-15), Benetton got the better of Edinburgh (24-17), while Munster claimed a hard-fought 24-17 victory in an all-Irish affair over Connacht .

This weekend’s URC action will see another round of South African v Welsh matches when the Sharks host the Ospreys on Friday (19h10), the Stormers take on the Dragons on Saturday (14h00) before the Bulls face Cardiff (20h00), and on Sunday the Scarlets are away to the Lions (13h30).

Mamelodi Sundowns latest: Mngqithi’s future back in the spotlight

More than 200mm of rain expected TODAY in parts of SA: Send us your pictures

‘I’ve lost a lot of business’: Minnie Dlamini blames trolls for no gigs

Chiefs: Samkelo meant to be like Man United legend