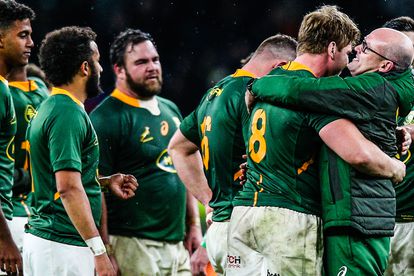 These Springboks will return to URC action this week. Image: Springboks/Twitter.

These Springboks will return to URC action this week. Image: Springboks/Twitter.

The local franchises will be strengthened by the return of their Springboks in time for round nine of United Rugby Championship (URC) action following the completion of South Africa’s four-Test end-of-year tour to Europe.

The Springboks embarked on a four-Test tour of Europe, with games against the Ireland, France, Italy and England. They returned home with a 50% success rate, having lost to Ireland and France before beating Italy and England handsomely.

But because the game against Eddie Jones’ England fell outside of the World Rugby Test window, the local three of the four local teams — the Bulls, Sharks and Stormers — had to restart their respective URC campaigns without their international players.

The Lions didn’t have any representation in the Springboks squad.

The Bulls hammered the Ospreys 43-26 at Loftus in Pretoria, the Lions edged the Dragons 33-25 at Ellis Park in Johannesburg, and the Stormers easily beat the Scarlets 36-19 at Cape Town Stadium, while the Sharks lost 35-0 to Cardiff at Kings Park in Durban.

The South African teams will now welcome back their Test stars in time for round nine URC fixtures, which will also be against the four Welsh regions.

The Sharks host the Ospreys on Friday. On Saturday, the Stormers play against the Dragons and the Bulls welcome Cardiff. In the only URC fixture on Sunday, the Lions are at home against the Scarlets.

Here is a list of Springboks will return to which franchises:

The remaining 16 Springbok squad members not listed above, ply their trade at overseas clubs, primarily in England, France and Japan.