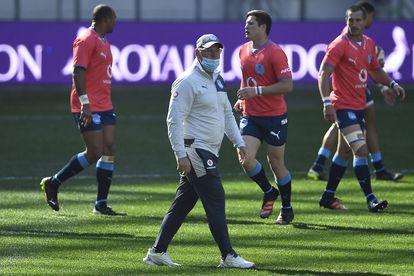 Jake White of the Bulls. Photo by Ashley Vlotman/Gallo Images

Jake White of the Bulls. Photo by Ashley Vlotman/Gallo Images

The Blue Bulls have named their travelling squad for the United Rugby Championship which includes the return of lock Sintu Manjezi.

Director of Rugby Jake White has decided to include Manjezi in his 37-man strong squad for the United Kingdom leg of the United Rugby Championship, following his lengthy injury.

Manjezi joined the Bulls in a high profile move

Manjezi, joined the Bulls in July 2020 as a marquee signing from the Cheetahs, in a deal that saw Springbok flyer Rosko Specman go the other way. The towering second-rower was often used off the bench in his first few months in Tshwane, but had began to establish himself as a starter in White’s side towards the business end of the Currie Cup last year.

As the Bulls claimed victory over the Sharks in that 2020 final played in January this year, it meant back to back titles for Manjezi who had won the tournament previously at the Cheetahs in 2019. But unfortunately for the 25-year-old, he would suffer a serious knee injury during that final that ultimately saw him sidelined for all of the 2021 season thus far. However, he has made a full recovery just in time for White to use his expertise playing in Europe with the Cheetahs to his team’s favour.

Besides Manjezi, another welcome returnee from a long-term injury is Springbok scrumhalf Embrose Papier. The nippy half back has been sidelined since the Preparations Series and is yet to feature in official competition for the Bulls this season. The likes of Springbok prop Lizo Gqoboka and Johan Goosen will also return and take part in this tour.

Here are the Blue Bulls fixtures for the tour:

The Vodacom Bulls touring group, by position, is: