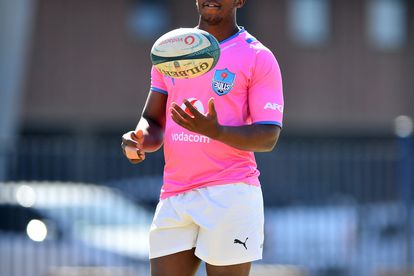 New Bulls recruit Phumzile Maqondwana is relishing his time at Loftus Versfeld while undergoing a gruelling pre-season in the build-up to a the 2022/23 season.
Photo by Gallo Images)

New Bulls recruit Phumzile Maqondwana is relishing his time at Loftus Versfeld while undergoing a gruelling pre-season in the build-up to a the 2022/23 season.
Photo by Gallo Images)

New Bulls recruit Phumzile Maqondwana is relishing his time at Loftus Versfeld while undergoing a gruelling pre-season in the build-up to a the 2022/23 season.

The former Pumas man is considered to be a bright prospect for the Bulls.

Maqondwana at home at Loftus

It has been only a few weeks since the workhorse loose-forward arrived in Pretoria, but he already says feels right at home, slotting in seamlessly to life in Tshwane.

“I’ve been looking forward to an environment like this. I’m definitely enjoying the experience, it’s something different. I’m just looking forward to seeing what results we will gain from such a solid pre-season,” said Phumzile Maqondwana.

“All the work we are doing during this pre-season is doing the body good. There are always hard moments, but those can only assist in building us as individuals and as a team.”

Getting acquainted with his new teammates and also getting an understanding of the coaching philosophy that he describes as “amazing” is top of his to-do list.

“It’s been really great getting to know the guys, the environment, the culture. It is all world-class, with world-class coaches, and I am just absorbing it all in,” Phumzile Maqondwana said.

“I am relishing the opportunity to work under Coach Jake White. It’s really palpable for me to work under such a high level of coaching. I’m still in awe at how Coach Jake approaches his coaching, and it’s crazy to think I’ve only just experienced the tip of the iceberg. I can’t wait to learn more from him and the other top-class coaches in our system.

The bustling loose-forward pinches himself when he reflects on his professional rugby journey which is something he never imagined would come to fruition.

Yet, Maqondwana, who hails from Elliotdale in the Eastern Cape, can be proud of what he has achieved and what lies ahead.

“Nobody could have ever predicted that one day I would reach the level I have reached at the moment, playing for the Bulls. It definitely is not a case of me blowing my own horn, but I never imagined I would become a professional player, let alone represent a franchise of the Bulls’ calibre,” he said.

“If you look back at my path, I was always an average rugby player that happened to be surrounded by a high-calibre talent pool. It was when I was out of high school that I got to understand what was reachable. What I realised was that there were a lot of players much more talented than I am who took the journey for granted, basing it just on talent.

“I was never the most talented, and that was always at the back of my mind, and that led me to knowing that I had to work hard.”

Phumzile Maqondwana’s hard work saw him flourish at Selborne College in East London in his schoolboy days before joining the Sigma Lions in Johannesburg in 2018. It was not until his stint at the Airlink Pumas in Nelspruit that he began to make himself noticed.

His performances for the Mpumalanga-based side were enough to catch the eye of Bulls director of rugby, Jake White, and CEO Edgar Rathbone which culminated in a phone call to the player to offer him a role at the Tshwane-based franchise.

“My journey took me to Nelspruit where I was in a space and environment to grow my market value. I knew there was a lot that needed to be invested in me to become a rugby player that could go far. I grew as a player, I gained confidence, good principles were instilled in me, I started getting a clearer picture of what I wanted and heightened my intensity to obtain it,” reflected Maqondwana.

“So, when Edgar and Jake came knocking, I started to appreciate the path I had taken and became excited for what lies ahead. The call came at an interesting time when I thought I had had a very average season. There were some other voices that believed I had had a more than okay season.

“Everything came full circle when I was back at the family farm in the Eastern Cape, and I had a few things that I wanted to sort out back home.”

The rest is now history. Maqondwana is now eager to make an impact at the Bulls, where he is excited about achieving great things with one of South Africa’s top rugby franchises.

While he is keen to contribute to the team, he is also enthusiastic about absorbing the culture and winning mentality of his new home.

“We are in a winning team with a winning culture. The focus is simple – we have got to win,” he said.

“The Bulls have always produced great loose-forwards, so receiving that call made me realise that they had noticed that I could add some value to a franchise as big as this one. That, for me, was very humbling. It was a no-brainer; this was a great opportunity I could not let pass.

“I’m quite excited about the prospect of playing in the URC – to experience what it’s all about and to develop in it.

“The aim is to be a mainstay not only in the team but in the tournament as well. I do back myself to work towards becoming one of the best players in future. I’m not a fan of talking about it, I’m not much of a talker, I believe in the principle of letting your work do the talking.

“I think I bring grunt. That is one of the main attributes that I think I have. I love the physicality, and I want to continue expressing myself as best as I can. I want to be a player that my teammates can always count on in the darkest of places. I want to gain their trust; I want them to know what I stand for and to continuously prove them right.”

“I want to be a team player for where the Bulls are going. They have achieved great things in the past two years and have what it takes to continue being a powerhouse in the coming seasons. I just want to add value wherever I can in that imminent success.”