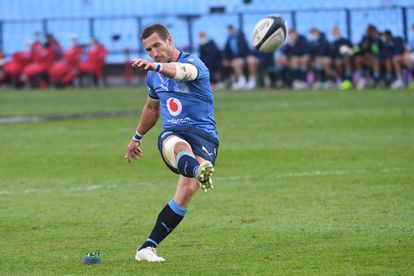 Johan Goosen will want to produce a big performance for South Africa A. Photo by Lee Warren/Gallo Images

Johan Goosen will want to produce a big performance for South Africa A. Photo by Lee Warren/Gallo Images

Johan Goosen will make his much-anticipated return for the Bulls when they take on Edinburgh Rugby in their United Rugby Championship clash at Loftus Versfeld on Saturday.

The 30-year-old Springbok will be starting at fullback as he makes a return from a long-term injury that sidelined him from early in the 2021/22 season.

Stravino Jacobs will also be a new addition to the backline, where he will replace winger S’bu Nkosi, who was called up to the national team this week.

Meanwhile, Zak Burger will earn a start at scrumhalf.

Recently capped Springbok, Elrigh Louw, will also make a return in the blue jumper where he will start in the No8 jersey in place of Mihlali Mosi who sustained an injury in last week’s opening clash at Emirates Airline Park.

The Bulls are expecting a tough challenge from the Scottish visitors who also started their season campaign on a high with an emphatic 44-6 win over Dragons Rugby last weekend.

“It was good to be able to start the new season on a winning note, beating a tough Emirates Lions side in their own backyard. We had a few areas we identified that we needed to work on this week and the boys were hard at work getting those better,” said Vodacom Bulls director of rugby, Jake White.

“Edinburgh is a tough and talented side. They had an incredible game against Dragons last weekend where they won by a convincing margin. We know how tough they are from our last meeting in the previous season where they beat us. We will need to be at our best if we want to get a good result. We expect another tough encounter against a well-coached outfit.”

The match will kick-off at 14:30 and will be televised on SuperSport.

The Vodacom Bulls team to face Edinburgh is: