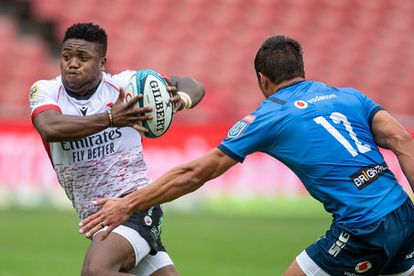 The Bulls have completed the signing of Lions centre Wandisile Simelane ahead of the new rugby season.

Simelane is a product of the Lions rugby system from schoolboy rugby to the professional ranks, and will now move to the Bulls.

There has been a lot of talk of Simelane’s crossing the Jukskei river, and trading the Lions for the Bulls. Although many may have viewed the move as a done deal as soon as the initial reports surfaced, sources very close to the negotiations table have informed The South African News that, matters were far from straight forward.

The reliable source reveals to this publication that, the initial agreement was between the Bulls and the player, a deal which would’ve only seen Simelane join the Pretoria-based outfit in November, at the end of his deal with the Lions. The Bulls top brass then moved to find a common ground with the Lions top brass and the player’s representatives. It is believed that the nature of these conversations were highly sensitive as one may understand when potentially using one of your biggest assets to your rivals, ahead of time. Eventually all the parties seemed to have reached a favourable agreement and compromise with the player set to join Jake White’s side earlier than first expected.

Bulls get their man!

“The deal between Wandi (Simelane) and the Bulls is all good now, everything is alright there. The parties in negotiations had to tread carefully because of the nature of the deal, of course but I can confirm that it is now over the line”. Said the source.

Quizzed for more details on the move the source revealed that Simelane will join the Bulls on a two-year deal from the Lions.

“Simelane has signed for two-years. The Bulls will make an official announcement, I presume next week? But it will be announced imminently though according to all the noises that I am hearing from both sides” concluded the source.

Simelane stayed at the Lions

This move will draw a close to the speculation on Simelane’s future, who was previously linked to both the Western Province and Sharks last year, before reportedly deciding to stay put at the Lions.