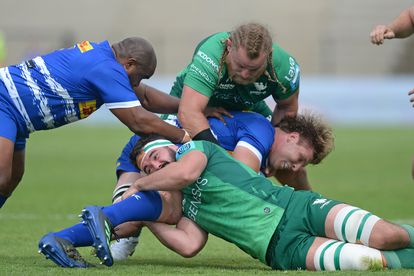 The Stormers opened their defence of the United Rugby Championship crown with a 38-15 win in an entertaining match played at the Danie Craven Stadium in Stellenbosch on Saturday.

The Capetonians led 13-8 at half-time, scoring a converted try through star man Evan Roos and two penalty goals, while the visiting side replied with a try and one penalty.

In the end, the hosts managed to score four tries, three conversions and four penalty goals in total, while the Irish visitors could only add a converted try to their halftime tally.

The first half was hardly three minutes old for No 8 Evan Roos to make his big frame presence felt with a typical, powerful run from open play to score in the corner. Manie Libbok slotted the conversion to hand the home side an early 7-0 advantage.

Connacht pivot Conor Fitzgerald replied with a mid-ranged penalty goal when the home defenders strayed offside to put the Irish side on the scoreboard at 7-3. But Libbok was on target again, this time to punish the visitors for an indiscretion at the breakdown, as he successfully struck his first penalty goal of the afternoon.

Ten minutes later he in increased the home side’s margin to 10 points with his second penalty goal just before the half-hour mark (13-3).

However, the green jerseys clawed their way back into the match with some attacking plays to deep into the DHL Stormers’ territory, forcing the blue and white jerseys on the back foot and some desperate defence.

Marvin Orie was sent to the sin bin as the visiting outfit piled on the pressure. With the Stormers lock off the field, the green jerseys finally struck from a lineout maul through hooker Dylan Tierney-Martin, who scored his maiden URC try, as they reduced the deficit to 13-8.

Libbok struck the target twice shortly after the interval with penalty kicks as the home side nudged into an 11-point lead at 19-8, mainly thanks to the accuracy of their kicking game.

The momentum then swung the way of the home side when Irish international Bundee Aki was red carded for a dangerous cleanout out tackle on Seabelo Senatla.

Andre-Hugo Venter – from a great build-up – and Hacjivah Dayimani then scored two eye-catching tries as the Stormers piled on the pressure to increase their lead to 31-8 with less than a quarter of an hour remaining.