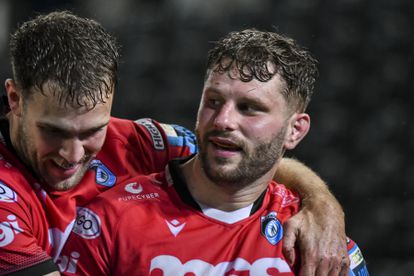 Cardiff against the Sharks in Durban. Image: Cardiff Rugby.

Cardiff against the Sharks in Durban. Image: Cardiff Rugby.

Cardiff produced a dazzling performance in the Durban rain to claim a famous 35-0 victory over the Sharks on Sunday.

Both sides were without their Wales and South Africa stars due to Saturday’s out-of-window internationals, but Cardiff’s achievement was nevertheless a hugely impressive one.

No Welsh region had previously won in South Africa since the inception of the United Rugby Championship last season, but the Blue and Blacks – without a victory outside of Wales since March 2021 – adapted better to a torrential downpour in the first half to take control of the match.

Dai Young’s men punished their hosts’ numerous errors and chalked up a penalty try and a Thomas Young touchdown as they opened up a 23-0 half-time lead, with Jarrod Evans kicking 11 first-half points.

Young went over again after the break before Ben Thomas wrapped up the bonus point, with Evans adding two more points with the boot.

The Sharks will host the Ospreys at Kings Park next week, while Cardiff will travel to Pretoria where they will face the Bulls.

The Sharks and Cardiff scorers:

Polo Vivo, Polo and T-Cross are VW’s most popular vehicles in SA