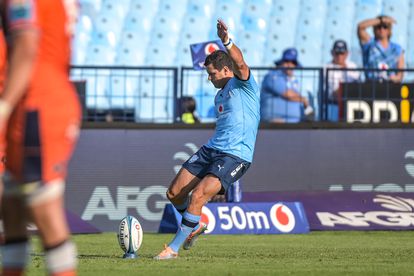 Morne Steyn of The Vodacom Bulls kicks the winning penalty during the United Rugby Championship 2022/23 match between Bulls and Edinburgh held at Loftus Versfeld in Pretoria, South Africa on 24 September 2022
©Christiaan Kotze/BackpagePix

Morne Steyn of The Vodacom Bulls kicks the winning penalty during the United Rugby Championship 2022/23 match between Bulls and Edinburgh held at Loftus Versfeld in Pretoria, South Africa on 24 September 2022
©Christiaan Kotze/BackpagePix

The Bulls made it two wins from two when they downed Edinburgh 33-31 at Loftus Versfeld in the United Rugby Championship on Saturday.

The match came down to the last kick of the ball with Edinburgh’s Henry Immelman missing a late penalty from just inside the Bulls half.

Justice served by the rugby gods

Bulls fans will likely feel that justice was served in the end as the final penalty came down to a borderline call made between the TMO and referee despite a lack of compelling video evidence.

Stravino Jacobs was the man who made the tackle, that the referee ruled was made on the chest before sliding up onto the neck.

Video evidence didn’t conclusively show any direct contact between Jacob’s shoulder and Mark Bennett’s neck but between the visibly confused referee and a TMO incapable of answering direct questions from said referee the ruling was made.

No yellow card was dished out, not that it would have mattered anyway since Edinburgh called for the tee and the hooter had already sounded.

Earlier it was the Bulls who raced out to a 15-0 lead early as the Bulls used their lineout dominance and Edinburgh’s lack of discipline at the breakdown to strike key early blows.

Edinburgh had started brightly but early mistakes saw them fail to make an impression on the scoreboard until the 24th minute.

Co-captain Grant Gilchrist was unlucky to go to the sin bin for the barest of contact in the air in a lineout with his team on a warning from referee Adam Jones.

By the time replacement flyhalf, Charlie Savala dived in at the corner Johan Grobbelaar and Elrigh Louw had already crossed while Chris Smith added a conversion and a penalty.

Darcy Graham scored the first of a hat-trick of tries just before the break though and only one point seperated the sides at the break.

Bulls come out of the sheds firing

The Bulls started the second half on fire though and Cornel Hendricks went in at the corner and Smith goalled the conversion to give the Bulls an eight-point lead but Edinburgh themselves hit back in a flash.

Graham again finished off a slick Edinburgh attack out wide but Bennett couldn’t close the gap to one point and Smith then nailed a long penalty kick to restore a six-point buffer.

Moments later Bennett lined up a long kick which struck the posts but bounced kindly for an onrushing Graham who got in for a sensational score.

Jacobs powered over with fifteen minutes to go but Smith missed a kick that would have given them a two-score lead after a long TMO referral prompted by assistant referee Griffin Colby, although it is a complete mystery what he thought he saw.

Damien Hoyland scored his side’s fifth try on 70 minutes and this time Bennett held his nerve and kicked Edinburgh into the lead.

After some initially great defence, Edinburgh have away a crucial penalty at a lineout and substitute Morne Steyn kicked the Bulls into a 33-31 lead that they would hold until the incredible climax.