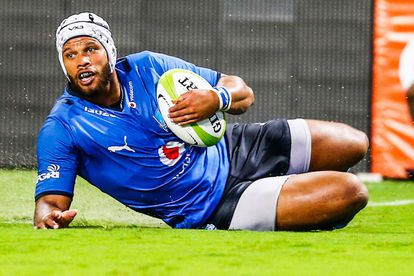 Nizam Carr has been selected in the starting lineup of the Vodacom Bulls team for Saturday’s United Rugby Championship encounter against the Ospreys at Loftus Versfeld.

Bulls Director of Rugby Jake White named his team for the round 8 clash and made a surprising selections in the team.

Capped Springbok Carr, who had recently returned to the Bulls for a second stint from Wasps, slots straight back into the run-on team at open side flank. He is joined in the loose trio by Walt Steenkamp who is at blindside flank and Elrich Louw who cracks the nod at No 8.

Newly appointed Bulls team captain Ruan Nortje is joined in the second row by Janko Swanepoel; while props Francois Klopper and Gerhard Steenekamp will scrum down either side of hooker Bismarck du Plessis.

In the back division, Wandisile Simelane has earned a rare start fullback, with David Kriel and Stravino Jacobs serving as the wings to compete a potential lethal back three for the home team.

Chris Smith and Embrose Paper have been backed at the best halfback-axis for the Bulls team, while Lionel Mapoe and Harold Vorster continue their solid midfield partnership for the Bulls.

Quote of the day – Letta Mbulu

Daily devotion: Your bible verse and prayer for 8 February 2023