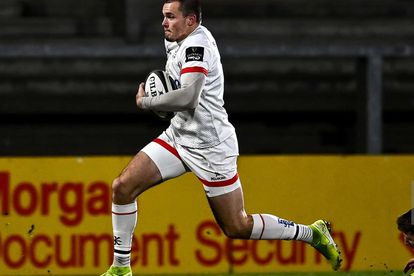 Belfast , United Kingdom – 2 January 2021; Jacob Stockdale of Ulster breaks away from Liam Coombes of Munster during the Guinness PRO14 match between Ulster and Munster at Kingspan Stadium in Belfast. (Photo By David Fitzgerald/Sportsfile via Getty Images)

Belfast , United Kingdom – 2 January 2021; Jacob Stockdale of Ulster breaks away from Liam Coombes of Munster during the Guinness PRO14 match between Ulster and Munster at Kingspan Stadium in Belfast. (Photo By David Fitzgerald/Sportsfile via Getty Images)

After Leinster’s surprise defeat at the hands of Connacht last week, they find themselves under rare pressure in the Guinness PRO14 as they prepare to host the high-flying Ulster at home on Friday night.

This match is the first of two particularly significant games in terms of the battle for supremacy in the respective conferences, with the other being Saturday’s match up between Connacht and Munster in Galway.

Ulster seek control of Conference A

With Ulster, who hold a 10-point lead at the top of Conference A, being the only unbeaten team left in the competition, the pressure will be on the defending champions – although they have two games in hand.

Leinster may be in the unchartered territory of having a point to prove after their first defeat in the competition since early 2019, but they will draw inspiration from their track record against Ulster which shows one defeat in 17 matches at the RDS Arena.

Coupled with that, Ulster have only prevailed once in the last eight games they played against Leinster, while the home side have never lost successive Guinness PRO14 matches at home.

Ulster, in turn, have displayed good form away from home recently, with their last defeat on the road being recorded last August.

Munster, meanwhile, can almost assure themselves of Conference B honours, meaning qualification for the final, if they maintain their recent record against Connacht of five wins in a row.

Connacht have only won once at home since October, but their confidence would have been boosted substantially by last week’s result.

Munster currently boast an eight-point lead over Connacht in Conference B, and that advantage will stretch into double figures with a win.

The big derby this weekend will see Edinburgh travel to Scotstoun stadium for the return clash against the Glasgow Warriors team they pipped 10-7 last weekend, while the Scarlets need to win away against the Cardiff Blues to keep in touch with Munster in Conference B.

Currie Cup Round Seven: Round-robin phase draws to a close