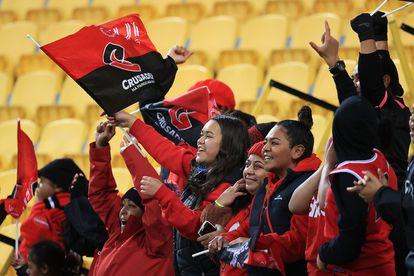 Crusaders fans celebrate their win during the Hurricanes vs Crusaders Super Rugby Aotearoa match at Sky Stadium on Sunday the 21st of June 2020. Photo by Marty Melville / Photosport.co.nz

Crusaders fans celebrate their win during the Hurricanes vs Crusaders Super Rugby Aotearoa match at Sky Stadium on Sunday the 21st of June 2020. Photo by Marty Melville / Photosport.co.nz

The sport’s governing body has agreed to spend an annual £1.2 million over three years on the attempts of franchises Fijian Drua and Moana Pasifika to join the competition from 2022.

“From a strategic perspective, it provides the best possible platform and pathway for the islands to reach their potential,” World Rugby chairperson Bill Beaumont said in statement.

“It is great for the players, allowing them to make the choice for the first time to be part of a local professional team at the top level of elite club rugby.”

The move is subject to approval from New Zealand Rugby and World Rugby said the teams will also be supported by their respective unions and private investors.

The Drua have competed in Australia’s second-tier National Rugby Championship since 2017 and won the title a year later.

“This is the missing piece to our rugby puzzle in the Pacific Islands and more importantly to Fiji rugby,” Fiji Rugby chief executive John O’Connor said.

“Being included in Super Rugby completes our elite pathway and will allow our best players to have the opportunity to play professional rugby right here at home.”

Moana Pasifika played their first and only game to date last May and included Fijian, Tongan and Samoan players in the loss to the Maori All Blacks.

“We have been reliant on our overseas-based players representing Manu Samoa, but the Moana Pasifika provides the missing link and pathway for our players to stay in the southern hemisphere,” Samoa’s rugby union CEO Vincent Fepuleai said.

“We are very grateful to World Rugby for this opportunity.”

This season’s Super Rugby has been split with a tournament in New Zealand and another in Australia due to the Covid-19 pandemic.

A Trans-Tasman competition will then start on May 14 with South African sides having left to join the PRO14.