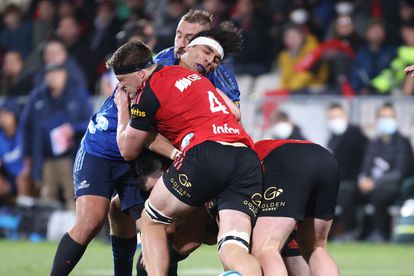 All Blacks lock and Crusaders captain Scott Barrett has received a four-week ban following the red card he received in last Friday’s Super Rugby Pacific defeat to the Blues.

Barrett was shown red in the 46th minute of the match after making contact with his shoulder to the jaw of Alex Hodgman.

Commentator Justin Marshall said at the time Barrett was “going to be in big trouble”, as the hit was late and “flush on the jaw”.

Scott Barrett may be back in Week 13

Barrett will miss the Crusaders’ games against the Rebels, Waratahs and Force, while his availability for the Round 13 match against the Brumbies will be determined by whether he completes World Rugby’s Intervention programme.

Dickson copped a ban after he was red carded for an early hit on Tevita Mafileo in their loss to the Hurricanes at Dunedin on Saturday.

Aumua was also banned for three weeks for making head contact in the same game, although he was not sanctioned during the match.