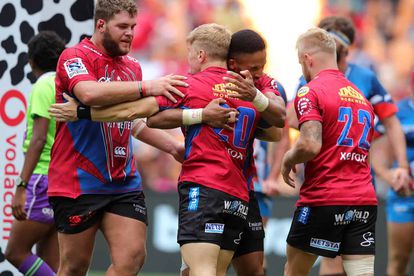 Morne van der Berg of the Lions celebrates scoring a try with teammates during the 2020 SuperHero Sunday match between Lions and Bulls at FNB Stadium, Johannesburg, on 19 January 2020 ©Samuel Shivambu/BackpagePix

Morne van der Berg of the Lions celebrates scoring a try with teammates during the 2020 SuperHero Sunday match between Lions and Bulls at FNB Stadium, Johannesburg, on 19 January 2020 ©Samuel Shivambu/BackpagePix

The Blues will be chasing a fourth win on the spin as they host the out-of-form Lions on Saturday morning.

Revitalised by victories on tour against the Bulls and the Stormers, Leon MacDonald’s men beat the Hurricanes in their last game to establish themselves as clear contenders for top spot in the New Zealand conference.

The Lions enjoyed perhaps their greatest spell in Super Rugby from 2016 to 2018 while the Blues were in decay, but the tables have turned now. Ivan van Rooyen’s men are in crisis after a 37-17 defeat to the Rebels — their fourth loss in five matches this season.

“I think they were physical for 80 minutes and probably out-rucked us, especially when we attacked. They’re a good, polished team, they’re playing with high spirits and they’re a real threat,” van Rooyen said in the wake of the defeat, as per Sport24.

“We made steps forward in certain areas and in others maybe not so much, so for us it’s an opportunity tomorrow and on Monday to really have a good look at the game and reassess where we are currently and then get ready for the Blues.”

Team news: Blues captain Patrick Tuipulotu misses out due to All Black rotation protocol, as does Ofa Tu’ungafasi. TJ Faiane leads the team from inside centre.

Ruben Schoeman drops out of the 23 with Carlu Sadie and Len Massyn relegated to the bench.

There are also changes to the backline, as the injured Wandisile Simelane makes way for Manuel Rass at outside centre. Tyrone Green starts at fullback instead of Andries Coetzee, with Jamba Ulengo fit enough to start in the no14 jersey.

Prediction: Blues by 14. You can find all the predictions for Round 7 of Super Rugby here.

Super Rugby 2020 as it happens: Blues vs Lions