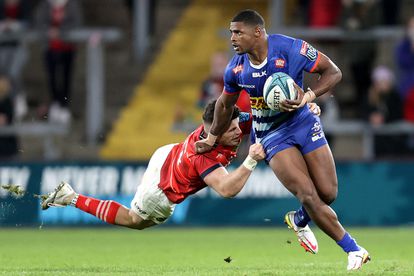 Gelant has played some of the best domestic rugby of his career this season, and as has been widely reported, the talented fullback has now taken the decision to join Racing in France.

According to Rapport, Gelant took the opportunity this week to travel to Paris and finalise the deal that will see him join Bok teammate Trevor Nyakane at Racing.

Gelant has earned nine caps for the Boks

It’s believed that Gelant has been offered a whopping salary in the region of €450 000 (R7.5 million) per season.

The 26-year-old was said to have been overlooked for both of the Boks’ recent alignment, with Willie le Roux, Aphelele Fassi, Frans Steyn, Damian Willemse and Kurt-Lee Arendse offering options at 15.

Earlier this week it was also reported that the Stormers have found a replacement for departing Gelant in the form of Clayton Blommetjies.

Blommetjies played for the Cheetahs in the PRO14, has represented the Bulls, and also had stints with the Scarlets in Wales and Leicester Tigers in England.

Meanwhile, the Stormers are also reportedly set to secure the services of highly-rated Springbok hooker Joseph Dweba from a French club.

Over a year ago, the Stormers already began preparations to expand and enhance their depth at hooker after Bongi Mbonambi opted to join the Sharks.

Serious consideration had turned to exploring the possibility of luring either Japan-based Malcolm Marx or Bordeaux’s Joseph Dweba to Cape Town.

Initially, it was merely exploratory as Marx is on a considerable salary with his Japanese club, while Dweba was only really at start of his club career in France.

However, according to Netwerk24, reliable sources have reportedly confirmed that negotiations with Dweba have now evolved to an advanced stage, and he looks set to make the move to the Cape after July.

With Scarra Ntubeni out with a long-term injury, it will be a massive signing for the Stormers to secure the services of Dweba, who played his first Bok game last year and boasts plenty of explosive power.