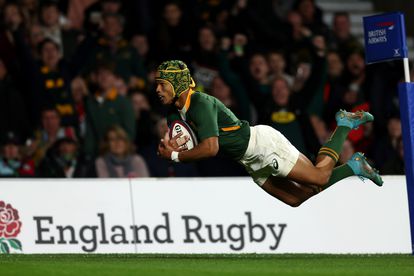 The Springboks claimed an impressive 27-13 win over England on Saturday. Here we dish out some key player ratings.

SPRINGBOKS V ENGLAND: SIX OF THE BEST VIDEOS FROM TWICKENHAM

Who fired for the Springboks:

What a year it has been for Arendse, who has scored seven tries in seven Tests, and his stunning solo effort on Saturday was undoubtedly his best one yet.

The speedster was sensational in virtually everything he did at Twickenham, adding real spark to proceedings as the Springboks continued to impressively evolve their attack.

Increasingly it seems very difficult to imagine Willemse being displaced from the No 10 jersey, even when Handre Pollard returns from injury.

Willemse produced yet another incredibly mature performance on Saturday, setting up Arendse’s try with a superb break and offload. However, it was his two sweetly struck drop goals that really showed how far he has come as a player this year.

Often the Springboks’ unsung hero throughout 2022, Malherbe deserves plenty of credit for what was another rampaging effort at scrum time against England.

Malherbe was a frightening presence at the set piece, and led the charge as the Springboks utterly dominated England at scrum time in a performance that was reminiscent of the 2019 World Cup final.

Earlier this year, De Klerk seemed to have lost his hold on the No 9 jersey, and yet the competition has brought the best out of him as he’s roared back into the starting lineup.

He was a bundle of energy against England, while his kicking – both at goal and to touch – was simply so good on Saturday.

Despite the impressive all-round performance for South Africa, there were a couple of players who flopped for the Springboks.

This was really an unfortunate turn of events for Du Toit, who has waited so long for another opportunity in Springbok colours, and soon after coming on as a substitute he was red-carded for a horrible tackle.

It was a red card that gave England a ray of hope at a time when the Springboks were in line to rack up a massive victory, and it really soured the end result.

The Stormers star was full of energy and effort, but unfortunately he was unable to make as much of an impact as he may have hoped.

This would have still been a highly beneficial experience for the youngster, but many would have hoped for a more notable performance on his first Test start.