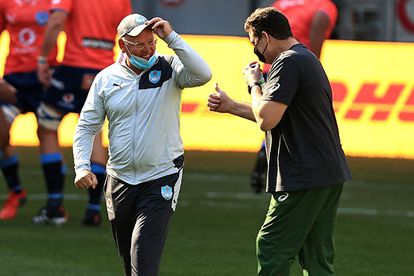 Jake White believes the latest Rassie Erasmus saga has done as much damage to the SA Rugby brand as the Kamp Staaldraad controversy.

World Rugby imposed a two-match ban on Rassie, after he posted a series of tweets seemingly highlighting inconsistent refereeing decisions by Englishman Wayne Barnes in the highly-charged encounter between the Springboks and France in Marseille.

It was Eramsus’ second suspension for the same indiscretion in less than a year, after he was banned last November for making and releasing a video in which he pointed out every mistake Australian referee Nic Berry made during the Springboks’ first Test against the British and Irish Lions.

White was the one tasked with rebuilding the Springboks and its brand after the fallout from his predecessor Rudolf Straeuli who had organised Kamp Staaldraad — a military-style boot camp — as a team building exercise for the Test squad in preparation for the 2003 Rugby World Cup. When explicit details of the camp emerged, SA Rugby was thrown into disarray.

Despite the difficulty of the his task, White managed to turn around the Springboks’ fortunes, with the team going on to win the 2007 World Cup under his reign.

“There’s no doubt that what’s been happening behind the scenes is going to have an influence. It’s normal,” White, the man who revived the Boks in 2004 following the sordid revelations from the military-style bonding camp before the previous year’s World Cup, said on Friday.

“I remember with Kamp Staaldraad, which happened just before I took over at the Springboks, how much damage was done to the brand. It takes a while before people see that brand differently again.

“We’ve read it and digested it. It feels like every day now people are talking about off-field things [like how to handle refereeing] instead of the Boks being the world champions.”

“Every guy has his days where the frustration boils over, but does it do damage? Of course it does damage,” said the Bulls director of rugby.

“It’s human. I’m sure if you [as a referee] are getting nailed every week, you’re definitely not putting your head up again and getting shot.”

The Springboks are scheduled to play England at Twickenham in their final game of the season before next year. South Africa have lost two of three Test on this European tour, against Ireland and France. They dismantling Italy 63-21 in Genoa last weekend.

Rassie Eramsus has already served one week of his ban, which will be completed this coming weekend when the Springboks play England. However, new reports have surfaced indicating that World Rugby could yet take more action against the wayward SA Rugby director of rugby after the international season concludes.