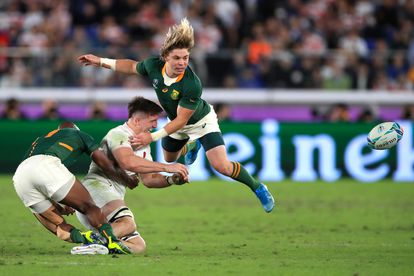 The Springboks and England do battle in the 2019 World Cup final. Photo: Adam Davy/PA Wire.

The Springboks and England do battle in the 2019 World Cup final. Photo: Adam Davy/PA Wire.

In the last five matches between the two teams, the Springboks have only managed two wins, but of course the result that matters most in this recent history was the emphatic victory in the 2019 World Cup final.

VIDEOS: BEST AND WORST RENDITIONS OF THE SOUTH AFRICAN ANTHEM

A closer look at the history books also shows that the Springboks have lost their last three games at Twickenham, which included a heartbreaking defeat late last year.

Narrow scorelines have generally been the order of the day, but the last time South Africa actually claimed victory in London was back in November 2014, when the visitors prevailed 31-28.

Before this Saturday’s highly-anticipated rematch between these two rivals, check out this highlights compilation below from the most recent Tests between South Africa and England.

As the two teams get set for another blockbuster battle, take a look back at some of the Springboks’ recent history between the sides: