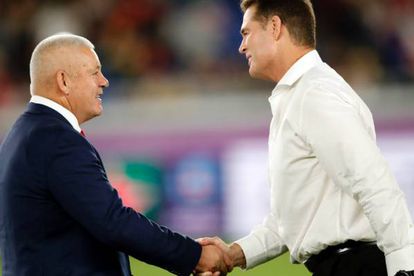 Warren Gatland believes that Rassie Erasmus’s social media posts are not in the best interest of the game and could set a dangerous precedent if nothing is done about it.

There is no doubt that the Springboks won’t be lacking any motivation ahead of this weekend’s Test against Italy, but if they were in need of any further fuel to add to the fire, Gatland’s scathing column for the UK’s Telegraph newspaper would certainly provide just that.

Erasmus has cut and tweeted several video clips highlighting officiating discrepancies over the course of the Springboks’ two defeats to Ireland (19-16) and France (30-26).

And even though Erasmus has come out and said he is not targeting referees or any match officials with social media entries, he was been on the receiving end of widespread criticism and is being branded a sore loser.

Gatland has become the latest high profile rugby personality to hit out against Erasmus for his ongoing video-supported social media posts about refereeing decisions.

Writing in his column for the Telegraph, Gatland opined that there is a process in place for coaches and directors of rugby to air concerns after games and get feedback – and it’s not on Twitter.

“While I was at Murrayfield on Sunday for Scotland’s game with New Zealand, someone showed me the tweets Rassie Erasmus was posting after South Africa’s loss to France and commented: ‘Oh, have you seen Rassie’s at it again’. While he’s being gracious in one way talking about the game and atmosphere and result, throughout those tweets there is a subtle dig at the match officials.”

“We don’t see other directors of rugby or head coaches doing the same thing. I think it’s a little bit disappointing.“

“I thought there were a couple of tough calls against Scotland, including one with Jamie Ritchie close to the line that was a scrum penalty against Scotland towards the end of the game where I couldn’t really see an infringement. But, we don’t see Gregor Townsend putting out videos like that afterwards.

“The thing is, Rassie is such an influential person in World Rugby. The match officials will go and look at those moments again. There is a process in place for people to do reports after games and get feedback. And I would like to see Rassie follow that process.”

“I can’t particularly see a defence there for what he’s doing. I don’t think it’s a great look for the game. We should adhere to the process. The last thing we need is coaches taking this media and making comments about the game.”

Gatland coached of the British & Irish Lions during last year’s three-Test tour against the Springboks, when Erasmus released a lengthy video to showcase the mistakes referee Nic Berry made in the first game, which South Africa lost.

The Springboks went on to win the second and third Tests of that highly-charged series, but Erasmus landed in hot water with World Rugby. He was handed a two-month stadium and match-day for his antics. And Gatland believes another intervention is needed to halt Erasmus’ tweeting spree.

“I really felt for Nic Berry on the British and Lions tour last year after the video Erasmus put out. The first response was really a defence from the Australian Rugby Union before World Rugby, and it even took about four days for the ARU to say something about it.”

“I once had a discussion with Bryce Lawrence who has been the head of referees in New Zealand, not about the Rassie video but a similar incident. Lawrence said to me, referees are only human. If they get criticised publicly by coaches, it can have an impact on their game. It’s a hard enough job as it is. If they have a poor performance or make mistakes, there’s enough people out there on social media and whatever to criticise them. I just think as coaches and administrators, there is a process and we need to keep our counsel.

“You would like to think that someone will pull Erasmus aside, whether it’s someone from the South African Rugby Union or their CEO or there’s a phone call, to tell Rassie: ‘I don’t think you’re doing yourself any favours, or World Rugby any favours by putting these things out on social media’. Let the public do that and go through the right processes.”