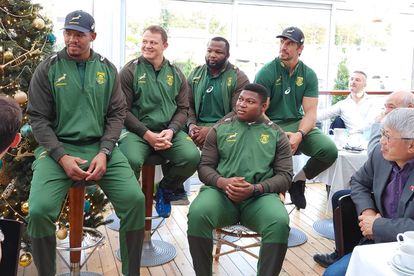 Some of the Springboks who were in attendance at an event in support of the The Chris Burger Petro Jackson Players’ Fund. Photo: The South African

Some of the Springboks who were in attendance at an event in support of the The Chris Burger Petro Jackson Players’ Fund. Photo: The South African

In support of the Chris Burger Petro Jackson Players’ Fund, Springboks stars such as Ox Nche and Eben Etzebeth entertained an exclusive audience at The Wharf in Teddington, London on Thursday morning.

South Africa are currently gearing up for an intense battle against England in the final Outgoing Tour match at Twickenham on Saturday, but the ‘Breakfast with the Boks’ ultimately served a far greater cause as several items were put up for auction in support of The Players’ Fund, which is the official charity of SA Rugby and the Springboks.

Below you can see some of the videos acquired by The South African as some of the Springboks shared their thoughts – and a few laughs – at this breakfast event on Thursday morning.

About the Player’s Fund

The Players’ Fund is the official charity of SA Rugby and the Springboks, and has supported over 600 seriously injured rugby players in South Africa since it was
founded in 1980.

Known as Rugby’s Caring Hands, The Players’ Fund is the team that partners with players who suffer catastrophic, life-changing injuries playing the game they love. Our role is to help these players adapt to their “new normal” by providing physical, psychological and emotional support along their journey, where their ongoing care and quality of life is our top priority.

The funds we raise are used to provide our current 102 recipients with wheelchairs, mobility equipment, home modification, physiotherapy and rehabilitation sessions, medical supplies and services, transport, and financial support.

To learn more about what we do please visit www.playersfund.org.za