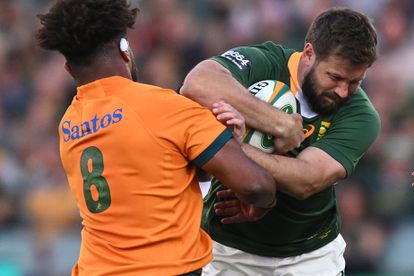 Springbok rugby appears to be fast descending into a state of turmoil following yet another dire performance against Australia in Adelaide. EPA/JAMES ROSS

Springbok rugby appears to be fast descending into a state of turmoil following yet another dire performance against Australia in Adelaide. EPA/JAMES ROSS

Springbok rugby appears to be fast descending into a state of turmoil following yet another dire performance against Australia in Adelaide on Saturday.

The 25-17 defeat was the Springboks’ six of their last 12 Rugby Championship matches and came against a Wallabies side South Africa haven’t beaten Down Under in nine years.

Australia were also coming off a 48-17 hiding at the hands of Argentina a fortnight earlier.

What is perhaps most perplexing for supporters is the continued faith shown in aging veterans by the coaching team of Jacques Nienaber and Rassie Erasmus.

Surely none of Duane Vermeulen, Frans Steyn and Elton Jantjies should be in the current squad?

The trio were thrust back into Test rugby despite lengthy injury-enforced stints on the sidelines.

All three players have been done a disservice with their selections.

Two of the best No 8s in the recent United Rugby Championships (URC), the Stormers’ Evan Roos and the Bulls’ Elrigh Louw are twiddling their thumbs waiting no doubt impatiently to get a call-up to replace 36-year-old Vermeulen.

Has Frans Steyn ever looked more out of shape? Fans were left shocked at the sheer size and weight (not in a good way) the 35-year-old utility back is currently tipping the scales.

And is Elton Jantjies really the second-best flyhalf in South Africa? If so, that’s a shockingly sad state of affairs.

Incumbent No 10 Handre Pollard is hardly setting the world alight at present and doesn’t even play his rugby in Mzansi. What’s happened to all the local No 10s?

How much worse could a player like Manie Libbok possibly be?

Nienaber surprised last week when he named his team on Monday rather than the advertised Tuesday, saying “why wait when you know who you’re selecting” (or words to that effect).

The smart money is on him taking his time to consider his options ahead of what is fast becoming a must-win second clash against the Wallabies in Sydney on Saturday, 3 September.

While their collective status among the greats of Springbok rugby isn’t in question, there’s an art to knowing when to call time on one’s career before you overstay your welcome.

For Vermeulen, Steyn and Jantjies, that time is NOW!