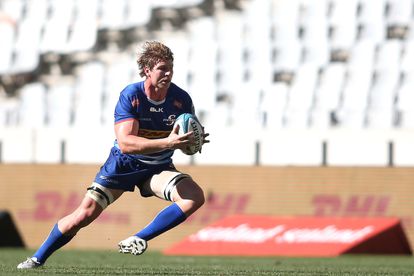 Evan Roos is set to make his Bok debut this Saturday. Photo: BackpagePix

Evan Roos is set to make his Bok debut this Saturday. Photo: BackpagePix

The Boks are already expected to bring at least two key players back into the starting line-up for this Saturday’s second Test against Wales in Bloemfontein, while Evan Roos is expected to be a new addition among the substitutes.

Last Saturday it took a late penalty from Damian Willemse for the Springboks to snatch victory from the jaws of what would have been a humiliating defeat in the opening encounter in Pretoria.

The good news for Springbok fans, though, is the fact that the world champions should be far better in next weekend’s second clash after shaking off the cobwebs at Loftus Versfeld. There should also be two key players returning to the run-on XV, expected to be Pieter-Steph du Toit and Handre Pollard.

Interestingly, Roos made his appearance at a Springboks press conference on Monday afternoon, and all signs suggest he is line for a Test debut this weekend.

“It is quite a rollercoaster. It has been unreal. I am just really happy to be part of this. I didn’t ever think it would happen,” said Roos when talking about his journey to this point in his career.

“To be sitting here is quite surreal. I just try to work hard every day and take in as much from these experienced players and this coaching staff as I can and just become a better rugby player.”

It’s tricky to work out exactly how Roos would fit into the squad, particularly considering Pieter-Steph du Toit should be back in selection contention this week. However, his presence in the media this week will certainly attract the attention of many fans who have been calling for his inclusion after a stunning URC season with the Stormers.

In all likelihood, he will play off the bench this Saturday alongside Elrigh Louw, who made his national debut last weekend.

“Elrigh and I go back to 2019. We were in the Junior Bok squad together. Unfortunately, I didn’t go to the U20 World Cup, but we spent a lot of time together in the training camp,” Roos explained.

“Everyone builds up the rivalry between us, but we actually get on really well and are quite good mates. He is an awesome player and there is a lot I have learned from him.

“We often exchange advice and tips to become better players.”

In terms of other possible changes to the team, Elton Jantjies endured a shocker in Pretoria and was replaced at half-time, with the 31-year-old clearly battling with form and confidence after recently recovering from a serious shoulder injury.

Handre Pollard is back in the Boks’ camp after belatedly linking up with the squad after winning the Top 14 with French club Montpellier, and he should now be an automatic selection in the No 10 jersey this weekend.

Some have suggested he should be phased back off the bench, with Louw perhaps then earning a promotion to start at blindside flank in place of Franco Mostert.

Yet it’s most likely that the Boks will not want to rush Louw straight into frontline action, and instead it should be Du Toit who reclaims the No 7 jersey.