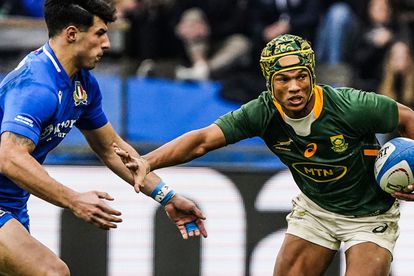 The Springboks came out firing in the clash against Italy on Saturday, scoring nine tries to two – a result that left the coaches and players pleased after two narrow defeats against Ireland and France in their two opening tour games.

Notably, Kurt-Lee Arendse was the star of the show, scoring two tries and brilliantly setting up another one in undoubtedly his best Test performance in what was just his sixth International appearance.

There is no doubt that the 26-year-old has added a different dimension to the Springboks’ attack, with his attacking ability offering a twin threat along with the likes of fellow playmakers Cheslin Kolbe, Damian Willemse and Willie le Roux.

With another big challenge awaiting this Saturday against England – who came back from 25-6 down with three tries in the final minutes to draw 25-25 with the All Blacks yesterday – it will be interesting to see if the Springboks embrace an ambitious brand of rugby this weekend.

“We had a plan against Italy and we stuck to it – I’m really proud of the guys,” said Arendse, who has now scored six tries in as many Tests this year.

“We said we needed energy after the two losses and we certainly brought that on Saturday, and it paid off.”

Afterwards, the former Blitzboks player remained humble as ever, but there is no doubt that he will have taken real confidence from his individual effort.

“It was amazing to score and to contribute to the team, but moreso that we could pull through the win. Personally I think there are still a few things I can learn, so I am going to continue trying to do so.”

The Boks made the journey from Genoa to London on Sunday and will begin their on-field preparations on Monday.

The clash against England this Saturday will kick off at 19:30 (SA time).