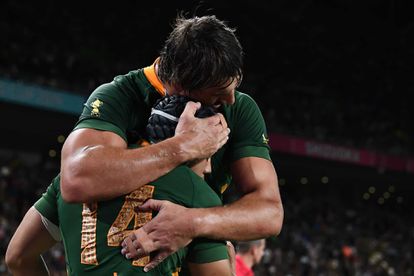 Springboks vs Georgia: The Springboks are all set to play the first Test of their season, against Georgia at Loftus Versfeld on Friday 2 July.

The Springboks vs Georgia Test will mark the Boks’ first international since winning the Rugby World Cup in Japan in 2019..

The clash will represent only the second senior international meeting between the Springboks and the Lelos of Georgia.

Inside centre Merab Sharikadze will lead the Lelos against the Rugby World Cup champions.

Head coach Levan Maisashvili is set to potentially hand a debut to one uncapped player in prop Luka Japaridze, who was included on the bench.

The Georgians are expected to provide a stern Test for the Springbok pack.

Rosko Specman, Aphelele Fassi and Jasper Wiese are in line to make their Springbok debuts.

Springbok coach Jacques Nienaber, who will guide the Springboks in his first Test as head coach, named 18 Rugby World Cup winners in his matchday squad – 12 of whom featured in their 32-12 final triumph against England.

The other players who featured in the grand finale of the international extravaganza are Frans Steyn (centre), Franco Mostert (lock), Malcolm Marx (hooker), Steven Kitshoff, Frans Malherbe (both props) and Herschel Jantjies (scrumhalf).

Kolisi will earn his 51st Test cap after striking his half century in the RWC final, while Pollard, Kitshoff and Kriel will all take a step closer to reaching the significant career milestone of 50 caps. Pollard will earn his 49th Test cap and Kriel his 47th, while Kitshoff will earn his 48th cap if he takes the field.

“We have selected the best team with an eye on what we would like to achieve in this Test against Georgia and we believe that we have a good balance with a number of experienced campaigners and a few young players who have made a strong statement this season,” said Nienaber.

“Most of the players in this squad are Rugby World Cup winners, while others have been part of the national squad for a few seasons, and this will be invaluable against a team that boast the passion that Georgia exhibit.

“We are also excited to see what the uncapped players bring to the table after impressive performances for their franchises in the last few seasons. Each one of them has proved that they deserve an opportunity at this level, and the commitment and enthusiasm they displayed at training has been striking.”

Springboks vs Georgia head to head

Springboks vs Georgia will kick off at 19:00 with the match being broadcast on SuperSport. Live streaming will be available to DStv subscribers through the Now App.