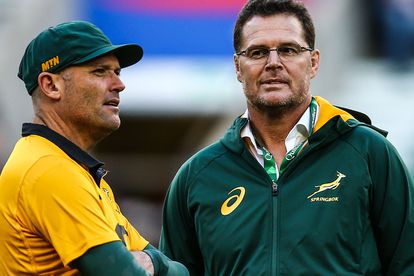 Springbok coach Jacques Nienaber has confirmed that SA Rugby director of rugby Rassie Erasmus WILL be joining the team on their November end-of-year tour. Photo by Steve Haag/Gallo Images

Springbok coach Jacques Nienaber has confirmed that SA Rugby director of rugby Rassie Erasmus WILL be joining the team on their November end-of-year tour. Photo by Steve Haag/Gallo Images

The Springboks will play Georgia for only the second time in their history at Loftus Versfeld in Pretoria on Friday, 2 July.

READ | GEORGIA NAME SIDE TO TACKLE THE SPRINGBOKS AT LOFTUS VERSFELD

Below, 10 stats and facts you should know ahead of the match.

– It will be the Georgians’ first trip to South Africa to face the Springboks.

– This match marks the second time these two nations meet – the first was in their pool match at the 2003 Rugby World Cup in Australia, which the Springboks won 46-19.

– Elton Jantjies is one penalty goal short of his 50th for the Springboks – and should he achieve this feat, he will match Naas Botha in fifth place for the most career penalty goals.

– There are 236 caps in the backline with 314 caps amongst the forwards. On the bench there are a further 174

– The average caps per player in the backline are 33, the forwards 39 while the players on the bench average 21.

– The referee is Mike Adamson of Scotland. This will be his first Test as a referee of a match involving South Africa and his second career Test match.