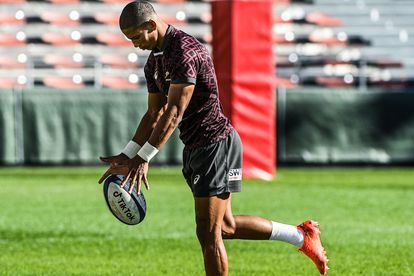 Springboks utility back Manie Libbok says he ready to fill in at any position where needed in the team’s Autumn Nations Series Test against Italy in Genoa on Saturday.

Libbok made his Test debut for the Springboks in the 30-26 defeat against France in Marseille last week. And he is adamant now that he has had a taste of international rugby, he is hungry for more Test caps.

“It was a very special moment for me to make my Test debut,” said Libbok.

“It was certainly one of the biggest moments in my life. It was an honour and a dream come true, and I’m grateful for the opportunity.

“Taking the field and getting my first taste of Test rugby was a fantastic feeling. Once I was on the field, I just wanted to get my hands on the ball and play. I feel exactly the same going into this match [against Italy], so I’m really looking forward to it.”

Coach Jacques Nienaber has gone with the unconventional 6-2 split on the bench in favour of the forward, with Libbok selected as one of two backline players serving as substitutes for Springboks against the Azzurri.

Libbok believes his versatility will came in handy against the high flying Italians, who boast a perfect record so far in the Autumn Nations Series after stunning wins over Samoa and Australia.

“I can play flyhalf, fullback and centre, so I will play wherever the team needs me.”

“They come off two good wins and they are on a roll, so we know we are going to face a very tough team,” Libbok explained.

“That said, we have prepared well this week and there is a good atmosphere in the camp, so we are looking forward to the challenge on Saturday.”

Libbok zoning in on starting role for Springboks

On his part, Nienaber was full of praise for Libbok and his personal development as a player. The coach professed that the 25-year-old is close to starting at flyhalf for the Springboks.

“He’s one injury away, and if you think about it, he’s our backup flyhalf currently, so I guess he’s really close,” Nienaber said.

“The reason why we selected him was the fact that he trained well. It’s now the fourth or fifth week that he’s been with us.

“He’s comfortable in the system and he’s growing within our environment. He’s slotting in nicely.”