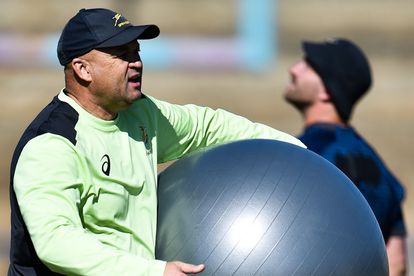 Assistant coach Deon Davids has warned the Springboks to be wary of any unanticipated threats England may pose in Saturday’s Test courtesy of Eddie Jones’ trickery.

The resurgent Springboks take on Jones’ England at Twickenham in what will be both teams’ final Test of the season.

ALSO READ | What time will the Springboks team be named on Tuesday?

As one of the all-time great rugby coaches, Jones has developed a reputation of engineering great upsets, and none more so than when he inspired Japan to a shock 34-32 win over the Springboks at the 2015 World Cup.

Later that same year, Jones was confirmed as England coach and in the seven years since taking up the position, he has England have won back-to-back Six Nations titles, registered a 3-0 series win against the Wallabies in Australia and defeated the All Blacks in a World Cup semi-final to reach the final in 2019.

More recently and closer to home, England snatched a late 28-27 victory against the Springboks last year.

“Eddie always has something up his sleeve,” Davids said at a media engagement in London. “I don’t think it would be any different this week.”

“So we have to be spot on in terms of our focus and how we react to the challenges they will bring in the different departments. We are preparing for a very a very tough encounter.”

“The margins between the top tier nations are very narrow as we have seen, so the big thing is we know it won’t be over until the final whistle. I think both teams will always fight right until the end looking at our character and approach, so we have to stay focused.”

The Springboks have been forced to make half a dozen personnel changes after its six European-based players — Cheslin Kolbe, Cobus Reinach, Trevor Nyakane, Vincent Koch, Jasper Wiese and Andre Esterhuizen — be recalled by their clubs.

And Davids is excited at the prospect of what the the newbies have to offer if given a chance against the English, who he believes will provide a different kind of test and a new set of challenges to that which the Springboks faced against Ireland, France and Italy.

“This is an important game for us, England are a quality team and Test matches here are always big contests, so we know what we are in for,” said Davids.

“We have a great group of players and we are excited to have some of the players from the SA ‘A’ squad back with us and to give a few players a chance to show what they can do in this match.

“The players coming in were part of a bigger group that have had experience at Test level with some having played for the SA ‘A’ team, while there are also some experience players in the squad that we know that that can do the job for us.”

What time will the Springboks team be named?

With several changes sure to be made to the Bok squad, it’s expected that the team will be released at 1:45pm SA time on Tuesday (*make sure you keep your eyes peeled on The South African to catch all the team news as it is announced).