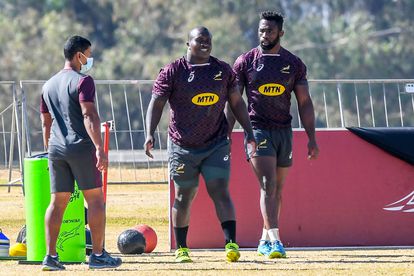 Jacques Nienaber’s side will be playing their first match since his appointment as Springbok coach when they take on the Georgians at Loftus Versfeld on Friday.

The Springboks first rugby match 20 months! The match against Georgia is an opportunity for these players to stake their claim ahead of the final training squad.

Seven Springboks TO KEEP YOUR EYE ON:

Ox Nche is given a golden opportunity to stake his claim in the green and gold. He is a powerhouse in the scrum and carries the ball ferociously.

Nche can even offload the ball in the tackle, a rare sight from a prop. He will want to assert scrum dominance and make some big carriers, proving that he belongs to be in the green and gold.

Nyakane made a massive difference every time brought him on. He destroyed the Sharks and Stormers scrums almost single-handedly. The Bulls prop turned both those games around with the momentum he brought the Bulls.

This has been a long-awaited journey for Trevor who limped off against NZ in the group stages of the 2019 Rugby World Cup. Meaning, he has had to wait even longer than the rest of this side.

Watch how he thrives against a beefy Georgian front row. Nyakane will look to stamp his authority and make a claim for Malherbe’s number 3 jersey.

Springbok captain Siya Kolisi will return to lead out the Springboks and will be looking to put in a strong performance as captain, leading his boys on the field for the first time since the final in Tokyo on 2 November 2019. He was vice-captain behind Lukhanyo Am at the Sharks which helped him focus on improving his own game.

Now, he steps up to lead his boys and the eyes of the rugby world will be on him, especially the British & Irish Lions players.

Kwagga Smith, what an opportunity he has here, after Duane Vermeulen’s ankle injury and operation.

The Boks need a number 8 that can step up and match the Lions intensity and physicality. Despite his smaller build, Kwagga is a specialist on the ground and an explosive runner. Having played sevens he has lighting speed and an attacking skillset to boot.

He is selected in what will be a trial run to play for the Boks against the British & Irish Lions.

‘The Weekend Special” is set to produce a special this weekend as he is debuting in a special position on the wing. A special day where we will see a unique rugby match day.

The stars are aligned for Fassi to excite and show Georgia why he has so many South Africans eagerly watching his talent and awe.

Get ready to be dazzled.

Since returning to SA, first with the Cheetahs and then the Bulls Specman has made his mark in SA rugby with scintillating runs and tries across the unions he has played for.

He is an exhilarating livewire with speed to burn and “Specmagic” athletism and skill. He has waited 32 years to reach his Bok dream and will certainly not be holding back.

Le Roux will need to be the leader amongst a back three with two debutants. The Bok fullback also needs game time to be at his best ahead of the series.

The first choice Bok number 15 will have his hands full against Liam Williams or even Stuart Hogg and Elliot Daly.

Le Roux will need to be composed and link up well with “The Weekend Special” and “Specmagic” to create real magic at the back.

The Springboks return to action for the first time in 20 months on Friday. Boks fans will be ecstatic to see their boys in action.